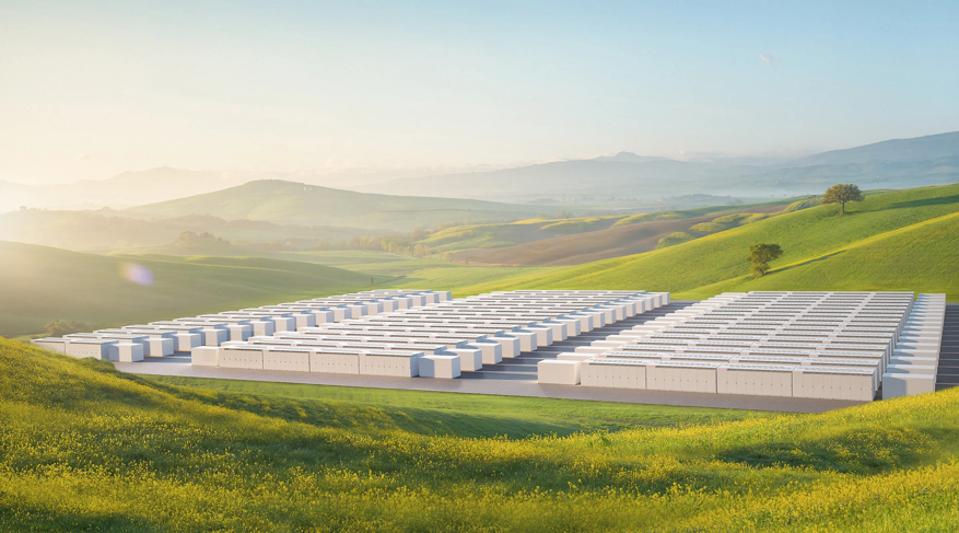 Concept drawing of Tesla’s 1-gigawatt hour (GWh) megapack battery facility. If operational an energy storage system of this size could power every home in San Francisco, CA for up to 6 hours. Credit: Tesla

Tesla and PG&E recently broke ground on a record-setting energy storage system in Moss Landing (Monterey) California that, once complete, will be the largest such installation in the world. The battery park will be able to dispatch up to 730 megawatt hours (MWh) of energy to the electrical grid at a maximum rate of 182.5 MW for up to four hours using 256 of Tesla’s lithium-ion (Li-ion) Megapacks. Tesla and PG&E will have the option to upgrade Moss Landing’s capacity to bring the system up to 1.2-gigawatt-hours which could, according to Tesla, power every home in San Francisco for six hours.

The facility is expected to come online in 2021 and will be designed, constructed, and maintained by both companies, with PG&E retaining ownership. The construction of the Moss Landing site and other such mega-storage projects around the world portends a massive shift away from hydrocarbon-based power systems towards renewable generation backed up by utility-scale storage.  According to Fong Wan, a senior vice president at PG&E:

“Battery energy storage plays an integral role in enhancing overall electric grid efficiency and reliability, integrating renewable resources while reducing reliance on fossil fuel generation. It can serve as an alternative to more expensive, traditional wires solutions, resulting in lower overall costs for our customers…the scale, purpose and flexibility of the Moss Landing Megapack system make it a landmark in the development and deployment of utility-scale batteries”

If the Moss Landing site is upgraded to the 1.2 GW capacity as anticipated, its storage capacity will be approximately ten times larger than Australia’s Hornsdale Power station, the previous record holder and another Tesla project. The next largest Li-ion storage system in the world is the United Kingdom’s Stocking Pelham station at 50 MW.

The construction of the battery farm in Moss Landing promises improved flexibility for grid demand spikes and load smoothing for variable generation from renewables. PG&E predicts that the Tesla Megapack system will save consumers more than $100 million over the project’s 20-year life span when compared to the forecasted local capacity requirements and procurement costs necessary in absence of the facility.

At the core of the new PG&E system is Tesla’s utility size battery Megapack. Each unit comes with a 3MWh capacity and boasts the modular ability to ‘stack’ up to a 1GWh site. The battery requires 40% less space and 10x fewer parts than current systems on the market. According to Tesla, this high-density, modular battery can be installed 10x faster than current systems. Tesla hopes for its Megapacks to one day replace inefficient ‘peaker plants’ in the grid, which snap on during periods of high demand at high costs to utilities and consumers.

Increasing utility investment in renewable power generation and battery storage technologies foreshadows a rough road ahead for gas and coal companies, and it remains an open question how nuclear power would compete. Just this week, oil and gas giant BP reported a $16.8 billion quarterly loss, cutting its dividend in half. In response, the company announced a new ‘Green Shift’ which would see its oil and gas production shrink by 40% over the next decade and its renewable investments increase 10-fold over the same period. The likes of BP and PG&E are responding to the growing societal and market pressures of climate change — including dropping costs for storage and renewable generation. A massive evolution in the power industry is underway before our eyes.

This article was originally written by Ariel Cohen and appeared here.