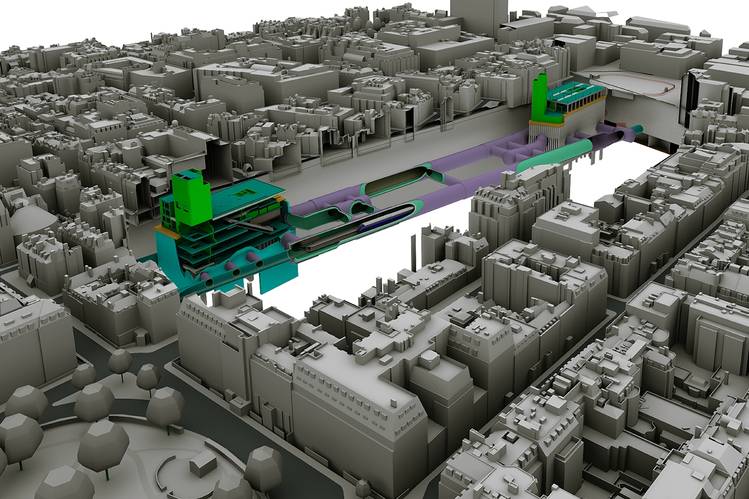 The dirt-under-the-fingernails world of construction is breaking digital ground.

In an industry where practices have barely changed for decades, the building site of the future promises comprehensive online modeling, drones as surveyors and virtual-reality images of everything from building sites to commercial real estate.

Led by some big builders and a clutch of startups stretching from Australia to Silicon Valley, the industry is seeking to eliminate the delays and cost overruns that have plagued it in the past.

“We are certainly seeing a rapid shift toward digitization in the construction sector, as the industry looks to harness new technologies to drive more-efficient delivery,” says Alasdair Reisner, chief executive of the U.K.-based Civil Engineering Contractors Association, who sees huge opportunities in building a digital construction industry.

Cost and schedule blowouts are the norm in construction. Large projects typically take 20% longer to finish than scheduled and are up to 80% over budget, according to a study by McKinsey & Co.

And the industry lags behind other fields in spending to develop innovations. Construction-related research-and-development investment runs less than 1% of revenue, compared with 3.5% in the automotive industry and 4.5% in aerospace, the study found. Only agriculture and hunting spend less on information technology.

Thin margins are partly to blame, as are the volatility of returns. Builders generally are reluctant to adopt expensive new technologies that appear to offer little in the way of savings.

Still, experts say, the benefits of new digital technologies could be significant. A recent report by Boston Consulting Group estimates that within 10 years, full-scale digitization—data-driven planning, surveillance and maintenance, among other innovations—would lead to 13% to 21% cost savings in the design, engineering and construction phases of nonresidential construction, or as much as $21 billion a year globally.

In planning and developing London’s new $19.8 billion Elizabeth train line, Crossrail Ltd. developed a detailed virtual 3-D model of the rail network. The model combines data from architects’ computer-aided-design systems with databases of existing sewage and electrical lines, information on parts requirements and the availability of workers from subcontractors. Traditional construction firms on a big project would have to work with large volumes of disparate types of information, often in printed blueprints and assorted software that would be tough to cross-reference, and where it is easy to make mistakes.

With the model, designers can see how the line and its stations fit into the city’s infrastructure of existing stations, pipes and tunnels. They can quickly make changes in the plans and avoid conflicts between one engineer’s plan for ventilation ducts and another design for electrical cables. They can also digitally track every component, giving every item an ID number and bar code to track its movement and monitor construction. Once the line opens in 2018, the model can be used to manage and maintain the network.

The 3-D model “is a significant contribution to being on time and to budget,” says Malcolm Taylor, head of technical information at Crossrail.

Digital technology is also poised to make big changes in actual construction work—such as creating components for buildings that can be fitted together easily on-site. China’s Winsun New Materials in 2014 said it was able to build 10 homes, 200 square meters in size, in 24 hours, using a gigantic 3-D printer it took 12 years to develop.

Such techniques are likely to become standard before too long. For instance, there is an effort under way at England’s Loughborough University to design a 3-D printer designed to produce complex structural components out of concrete, such as curved panels and other architectural features. Since late 2014, the university’s Richard Buswell and Simon Auston have teamed with Scandinavian builder Skanska SKAB -0.70 % AB to develop the technology.

But digital technology doesn’t just have potential to create building components. It may actually put them together, too.

SAM, short for Semi-Automated Mason, is a bricklaying robot from New York-based Construction Robotics that handles tasks such as picking up bricks, applying mortar and laying them. The company has five units it rents to builders and more under construction. Co-founder Scott Peters won’t disclose rates for the robot, but says that on average it should save a company about 50% in labor costs. (Humans still need to work along with the machine, typing in instructions via a tablet app, loading the machine with bricks and positioning it at the right level.)

Brawdy Construction recently used SAM to build a two-story headquarters for a company in Buffalo, N.Y. The builders did the job with a six-man crew alongside SAM, says Jim Brawdy, the company’s president. “We’re laying a brick every nine seconds,” he says, adding that a human crew averages about 30 seconds. And “the robot needs no coffee, lunch, bathroom or smoking breaks.”

Australia’s Fastbrick Robotics Ltd. FBR 0.00 % is developing another robotic bricklaying machine, Hadrian X, that can trim bricks to various sizes and move them into position. Mike Pivac, the company’s chief executive, says the machine will be able to build with a high degree of accuracy, limit wasted bricks and can work 24 hours a day in most weather without having to stop for mortar to dry, since it uses a special adhesive.

Work on a commercial prototype began in July, and the company plans to have its robots on building sites by the end of next year.

In Australia, Propeller Aero offers a service that brings together and makes sense of the images collected by drones flying over prospective construction sites. Drones are able to quickly collect video footage of a site and feed that into software where images can be analyzed against work plans. That speeds up monitoring, particularly in areas that are hard or dangerous for a human to reach, and helps contractors pick out problem areas.

Technology is also changing how workers interact with information that in the past would be locked in stacks of blueprints and other files. Trimble Navigation Ltd. TRMB -1.23 % , of Sunnyvale, Calif., is testing software that works with Microsoft Corp. MSFT -1.09 % ’s HoloLens, which allows users to see architect drawings as holograms superimposed on the real world.

With the technology, users can seem to step inside a blueprint while interacting with others on the project, allowing construction teams to better understand plans and managers to better evaluate changes. Decisions can be made earlier in the process, saving time and avoiding costly changes later, Trimble officials say.

This article was originally written by Robb M. Stewart and appeared here.

Historic Hearst Estate in Los Angeles Is Listed for $195M