Out of hemp’s many promising uses, one of the best could be in construction It has become almost a cliché to discuss the benefits of hemp, the supposed wonder plant with almost endless uses — from woven fibers to edible seeds to bioplastics. “Of course, hemp is that magic crop that does everything,” says Nicholas Carter, an environmental researcher who, along with Tushar Mehta, a Toronto-based doctor, runs the website Plant Based Data. His work involves reading through scientific papers and studies and summarizing the most important work supporting plants as a source of food and other important uses. Given the hype, Carter wondered just how much power hemp really had. “I wanted to see the research out there on it, to see what’s actually real, what’s actually backed by evidence,” he says.

Magic? Not exactly. But Carter came away from his attempted debunking a hemp believer. And one of the most promising of its many uses, he found, is its application as a building material known as hempcrete. 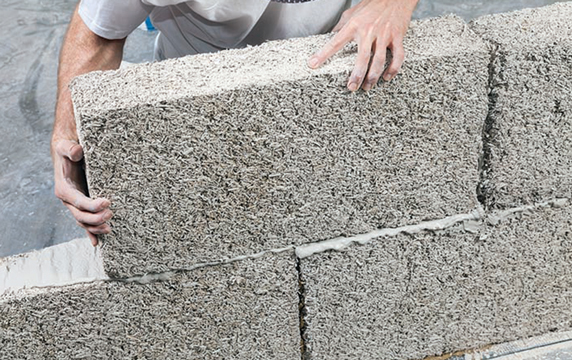 Although not a direct replacement for concrete, hempcrete has many benefits as a building material. Photo courtesy of IsoHemp

Like its namesake concrete, hempcrete is a material mixed with a binder that hardens it into a solid in the form of blocks and panels. Made from the dried woody core of hemp stalks and a lime-based binder, hempcrete can be cast just like concrete. But unlike concrete and its binding cement, which accounts for about 8 percent of human-generated carbon dioxide emissions annually, hempcrete actually sequesters CO2. According to a recent study, hempcrete can sequester 19 pounds of CO2 per cubic foot, roughly the equivalent of the annual carbon emissions of three refrigerators.

“While we’re growing it and building hempcrete, it’s sucking CO2 the whole time and encapsulating the CO2 in the structure,” says Eric McKee, founder of the U.S. Hemp Building Association.

S.R. Karade, senior principal scientist of the Central Building Research Institute n Roorkee, India, outside New Delhi, has been studying hempcrete and wrote in a recent paper for the Journal of Cleaner Production about how hempcrete performs as a building material in terms of insulation, durability, structural strength and acoustic control, among other criteria. Overall, Karade found, hempcrete meets the current standards of most building applications and in many cases outperforms materials currently used, particularly for insulation.

In terms of thermal resistance and moisture-absorbing behavior, hempcrete may be at the top spot among walling materials in the future.

Hempcrete is not a direct replacement of concrete, Karade cautions. In the lab he’s been able to make hempcrete with a compressive strength of 3 megapascals (MPa). “Typical concrete blocks, used for making walls, have compressive strength values varying between 5 MPa and 20 MPa,” he wrote in an email. “Due to its poor mechanical strength, it cannot be sufficiently relied upon to undertake any structural loads. However, considering its impressive functional properties, in terms of thermal resistance and [moisture-absorbing] behavior, hemp concrete may be at the top spot in the list of walling materials in the future.” 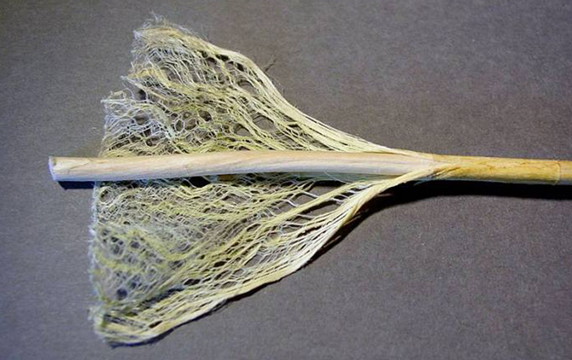 Made from the dried woody core of hemp stalks and a lime-based binder, hempcrete has many benefits in building applications, including carbon sequestration. Public domain via Wikimedia

In other words, it can’t supply the load-bearing structure of a building, but it can insulate and cover its walls.

That’s part of what makes hempcrete such a potentially transformative building material, says Steve Allin, director of the International Hemp Building Association. Not only can hempcrete itself sequester carbon, but its use can help reduce the production of more CO2. “What’s really important about this material is we can create new structures or we can update or retrofit existing structures so that they don’t need air conditioning,” Allin says.

As Karade notes, hempcrete has a high thermal capacity compared with concrete, making it good for both the structure of a wall and its insulation. 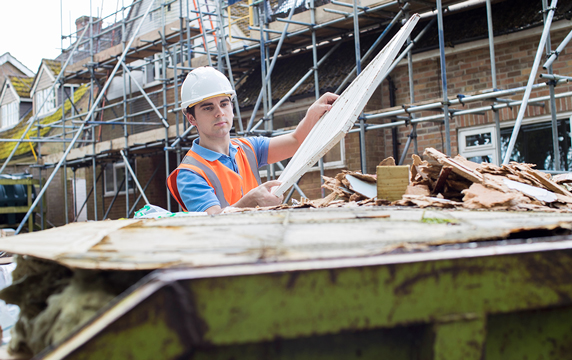 Hempcrete can be used in place of common construction materials such as drywall and plaster, which account for about 10 percent of building construction debris. Photo: iStockphoto.com | Daisy-Daisy

Hempcrete can also cut down on another big problem: construction waste. Concrete represents more than half of the debris generated by building construction and demolition. The U.S. Environmental Protection Agency estimates that more than 23 million tons of concrete debris was created during construction in 2015.

And while hempcrete can’t be used for structural sections of a building, it can be used to replace non-structural elements of walls that traditionally could use concrete. Hempcrete also can be used in place of common construction materials such as drywall and plaster, which account for about 8 percent of building construction debris.

Allin says builders are beginning to see value in hempcrete. Buildings have been built or renovated with hempcrete in France (French), the U.K., Belgium, Ireland, the Netherlands, Italy and Australia. He says the British Science Museum Group’s artifacts storage facility used hempcrete, as have public housing towers and even renovations on stone buildings hundreds of years old.

The challenge, he says, is availability. Only about a dozen hemp processing plants are able to process hemp into a form usable in the creation of hempcrete, and most are in Europe, according to Allin. “That’s really the logjam,” he says. “What we really need is investment in primary processing. And that investment needs to be on the longer term, rather than people expecting quick returns and thinking of it as some other standard quick buck.”

The other major challenge is the legality of growing hemp, which can be hard to distinguish from marijuana plants.

Karade notes that the other major challenge is the legality of growing hemp, which can be hard to distinguish from marijuana plants. “The commercial off-take of hemp concrete is still limited by the regulatory constraints of hemp cultivation,” Karade says.

But laws are beginning to change. In the U.S., the 2018 Farm Bill allows for the broad cultivation of “industrial hemp,” but with tight restrictions on grower licenses and the crop’s psychoactive content, tetrahydrocannabinol, or THC.

“Once those things are in place, it will all become profitable,” Allin says. “In a way we’re talking about starting an industry from the ground up.”

This article was originally written by Nate Berg and appeared here.