Downtown Los Angeles (DTLA) is in the midst of a building boom. With residential, commercial, retail, office space underway, developers are meeting strong demand for an urban live-work-play lifestyle in the city.

Residential development, the report found, is also driving much construction activity in the area, with almost 3,300 units coming online in 2018; 7,000 under construction at the end of last year; and 35,000 more in the planning stages.

The project that will deliver the most new residential space to DTLA this year is the Omni Group’s Hope + Flower development. The dual towers, one 31 stories and another 40 stories, will offer 730 luxury rental units with approximately 7,800 square feet of commercial space. Another major residential project that is scheduled for completion in 2019 is Macfarlane Partners’ Park Fifth project, which Suffolk Construction is building. When the entire project is built out, it will offer 660 apartments.

But the residential trend has definitely favored market-rate construction, leaving DTLA short on affordable living space. At the end of 2018, affordable units made up not quite 28% of total downtown housing stock. That share will shrink to about 24% when all the units under construction now are complete and possibly to less than 17% if there are no new affordable projects and everything in the planning pipeline comes to fruition.

The office and retail markets are also hot, and Apple’s announcement that it will open a flagship store and event space in the historic Tower Theatre promises to spur even more commercial development in DTLA. Other companies are also laying claim to downtown space, including engineering firm Arup, which has taken 66,000 square feet in the 1,100-foot-tall Wilshire Grand Center. The supertall tower opened in 2017 and is the tallest building west of the Mississippi River.

The big story, however, surrounds the $1 billion mixed-use developments that are consolidating all of these building types into megacomplexes in DTLA. Public outcry against these high-density projects reached a fever pitch back in March 2017 when Los Angeles voters had the chance to put a moratorium on the zoning changes that make these developments possible. That measure failed. 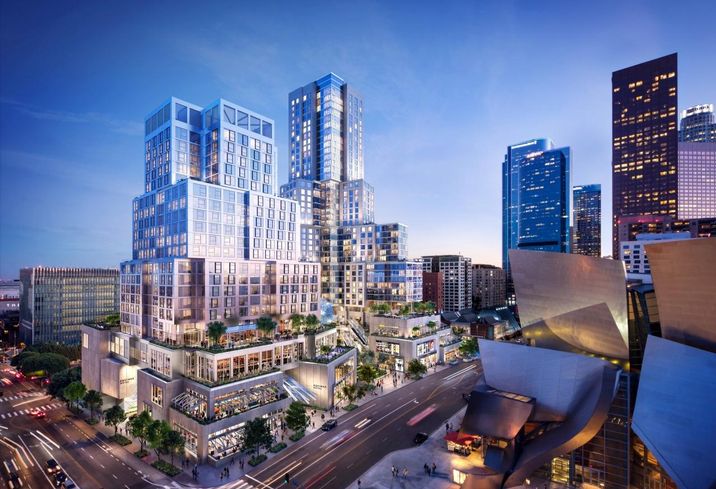 Rendering the The Grand coming to Los Angeles.

Last month, Related Cos., the same developer behind the $25 billion Hudson Yards development in Manhattan and the $7 billion The 78 project along the Chicago riverfront, broke ground on The Grand, which has spent 10 years in the planning phase and was designed by legendary architect Frank Gehry. The $1 billion project will feature 436 residential units, 176,000 square feet of retail and a 20-story, 309-room Equinox Hotel. The project is also intended to be an entertainment hub with restaurants, a movie theater and a public plaza. The hotel will also provide 12,000 square feet of meeting and event space, ballrooms and 27,000 square feet of amenities.

But not all DTLA projects are without their problems. The $1 billion Oceanwide Plaza promises to deliver more than 500 condos, 166,000 square feet of retail and a 184-room Park Hyatt to downtown Los Angeles, but construction stalled in January amid rumors of cash flow problems on the part of Chinese developer Oceanwide Holdings.

When general contractor Lendlease first pulled the plug, Oceanwide said that construction would restart in mid-February after it recapitalized the project, but the job remains inactive. As it turns out, contractors have filed more than $60 million of mechanic’s liens for unpaid bills since June 29. Contractor Webcor has filed the biggest claim for $53 million.

So whether the approach is adaptive reuse like the six-building, ROW DTLA marketplace and creative office space development or new construction like the four-tower mixed-use Metropolis, DTLA is changing and growing, a shift that doesn’t seem to have an end in sight.

11 Quotes on Kindness That Every Entrepreneur Needs to Read