At some point this year, Apple will move roughly 14,000 employees into its brand new spaceship-shaped headquarters in Cupertino, California. The campus, which reportedly took 13,000 contractors and $5 billion to build, was one of the last major projects that Apple founder Steve Jobs worked on, and its construction has apparently has been held to the same high standards as any other Apple product. According to a report from Reuters yesterday, Apple Campus 2, as the company is calling it, has had a level of corporate oversight that very few architectural projects receive, with the company requiring sign-off on just about every aspect of the design and construction.

Here are a few of the more intense details from the years-long build:

The original contractors left. Skanska USA and DPR Construction, first tapped to build the project, left after work had begun, which Reuters points out is rare for a project of this scale. Perhaps the micromanaging became too much to handle.

The buildings had to be perfect. The 2.8 million-square-foot main building could not have single electrical wire or pipe in plain sight, which likely makes it only slightly easier to modify or repair than Apple’s own laptops. Nor could any ventilation or piping be installed in a way that would reflect it onto the glass exterior walls.

Likewise, in the same way that an iPhone arrives in a clean, white box, free of fingerprints, dust, or anything else that could detract from the immaculate Apple experience, the company told workers that its headquarters’ ceiling panels, made of polished concrete, had to be pristine inside and out. “Just as the inside of the iPhone’s audio jack is a finished product,” Reuters reporter Julia Love said in her report.

It looks great, but isn’t particularly functional. Much as Apple has eschewed the headphone jack in its new phones and just about every port in its new laptops, form also won over functionality at its new HQ. The campus’s main building is shaped like a donut (or a donut-shaped spaceship), meaning that if you’re on one side and need to get to the opposite one, the quickest option involves leaving the building entirely. “It’s not about maximizing the productivity of the office space, it’s about creating a symbolic center for this global company,” Louise Mozingo, the head of the landscape architecture and environmental planning department at the University of California, Berkeley told Reuters. “They are creating an icon.”

It has the world’s largest piece of curved glass. This has been known for a while, but Apple is currently installing 6 km (3.7 miles) of curved glass onto the exterior of its new main building. 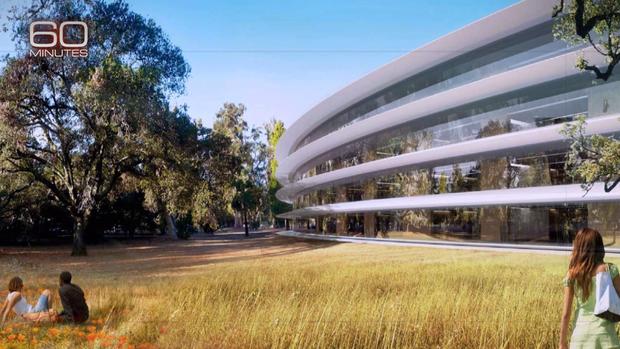 Apple’s documentation was extensive. So extensive that there was apparently a set of guidelines for using a specific type of wood. It ran 30 pages long.

Apple was more demanding than most regulators. In the US, the tolerances permitted for construction measurements—how much leeway there is between what measurements a builder is working toward, and what they’ve actually cut—are usually about an eighth of an inch. According to Reuters, Apple asked for still more precise measurements, even for things that employees wouldn’t be able to see.

The iPhone is everywhere. Architect German de la Torre, who worked on the project, told Reuters that Apple’s design language pervaded every aspect of the company’s approach to the buildings—even down to the toilets:

German de la Torre, who worked on the project, found many of the proportions – such as the curve of a rounded corner – came from Apple’s products. The elevator buttons struck some workers as resembling the iPhone’s home button; one former manager even likened the toilet’s sleek design to the device.

There are doorways, but not thresholds. Apple wanted every entranceway to be completely flush, with no thresholds between doors. Although the constructors protested, Apple said it was a must. The reason, according to Reuters, was so that engineers had less chance of getting distracted from their work as they walked, (although it’s unclear how much coding Apple engineers are doing while walking in the first place).

It took 15 meetings to get the signage just right. Apple wanted its headquarters’ signs to be as minimalist as everything else about it, but fire codes dictated that they actually need to be legible, in case of, you know, a fire. A representative for the Santa Clara county fire department, Dirk Mattern, told Reuters he guessed he sat in on 15 meetings that covered the buildings’ signs.

Door handles took over a year to figure out. One contractor told Reuters that after a year and a half of back-and-forth, the company still wasn’t completely sold on the door handle design that contractors had brought. An Apple reviewer told the contractors that they felt a bump in the design, even though the measurements indicated no defects were present. It’s not clear if the door handles have yet been finalized.

Constructing an Apple HQ is like handling fine art. Workers had to wear gloves to make sure they didn’t leave any fingerprints or scuffs on the materials they were working with. “It’s like a painting that you don’t want to touch,” Brett Davis, the regional director of the painters union Apple used, told Reuters. “It’s definitely going to be something to see, if they let you in.”

This article was originally written by Mike Murphy and appeared here.

Ready for kickoff: Stadium design tech on display at Super Bowl LI and beyond