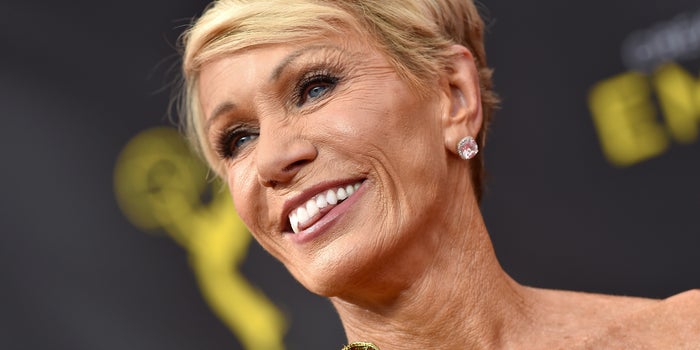 You may know her as a multi-millionaire investor on ABC’s Shark Tank, but New York real estate mogul Barbara Corcoran didn’t become one of the highest-paid female investors in the world overnight. Like many other entrepreneurs, she climbed her way to the top from nothing.

Barbara Corcoran grew up poor. Despite her external circumstances, however, she maintained a strong imagination and showed keen business acumen from a young age (she was known to set up “rock stores” in her backyard).

At 23, Corcoran was making ends meet by waitressing when she met future husband Ramone Simone. And though he gave her a $1,000 loan to start a joint real estate business, Simone left her to marry his secretary not long after, claiming Corcoran would “never succeed without him.”

While painful, the experience lit a fire under her. Corcoran spent the next 23 years building her empire: New York City real estate brokerage the Corcoran Group. This group went on to become the largest residential real estate firm in New York before Corcoran sold it to NRT in 2001 for $66 million.

Barbara Corcoran’s life is a true rags-to-riches story. And now, at age 71, Corcoran’s legacy (and, not to mention, $80 million net worth) is proof that no obstacle is too big to overcome.

Your past doesn’t define you

Barbara Corcoran grew up in Edgewater, New Jersey, sharing a two-bedroom apartment with her mother and nine siblings. While it would be easy to set her sights lower in such circumstances, Corcoran has repeatedly stated her belief that growing up poor is a “key ingredient for success.” “Poor kids,” she asserts, “have nothing to lose, and nowhere to go but up.”

By looking at her life experiences, we can see that challenges and letdowns aren’t inherently bad: they can serve as powerful motivators for success. Ultimately, Barbara Corcoran shows that no matter your circumstances, you have the power to make a change.

Grades matter — but so does motivation

Corcoran says that she was a straight D student in high school and college. She even flunked out of several courses in her freshman year before transferring to a second high school.

She also struggled with dyslexia, and, as a result, didn’t learn to read as early in life as her peers. In fact, it wasn’t until her son, Tom, was diagnosed with dyslexia in second grade that Corcoran realized she’d been dealing with it for her entire life, as well.

Corcoran made major personal strides without even realizing the magnitude of the odds stacked against her. Her success alone is proof that you don’t have to “look good on paper” — get straight As, be at the top of your class, or even progress at the same rate as your peers — to succeed in business ventures (or in life).

You deserve to be heard

The New York real estate industry, like many other fields, is dominated by men. Corcoran recalls that in her early days in business, while women did make a good deal of the sales, they still worked for companies that were entirely owned or managed by men.

While progress has been made, gender barriers still exist in the working world. Corcoran says that the key is not to try to become “one of the boys,” but to “work your female attributes” to your advantage. By saying this, she’s referring to her belief that women tend to excel in people skills: “We’re better bridge builders, we collaborate better, we don’t stand on ceremony or ego, we’re willing to share credit and we’re more intuitive and trust our gut more. We’re just better at running businesses than men.”

You heard it from her: stand up for yourself in business, utilize your unique attributes and perspectives, and don’t back down in the face of uncertainty or injustice.

Need motivation? If Barbara Corcoran had backed down at her first offer for her real estate company, she’d have sold it for just $22 million — one-third of its eventual worth.

Each failure is fuel for the fire

You likely wouldn’t expect Corcoran, with her enormous success and impressive net worth, to refer to herself as the Queen of Failure. Many who know her story would say she’s quite the opposite: she worked 22 jobs by the age of 23 before starting her real estate empire with just $1,000. But it’s the truth. Corcoran has even said, “Failure is what I’m best at.”

In fact, she almost didn’t accept that $1,000 loan from Simone because she was afraid of losing her job as a waitress. And when her husband left her and married his secretary, Corcoran said she considered giving up. Luckily, she refused to second-guess her instincts: she accepted the loan, built her business up, and when Simone left her, took half their business with her.

More recently, in 2008, Corcoran tried out for ABC’s “Shark Tank.” Days before she was set to fly to L.A. for the job, however, the show told Corcoran that they’d gone with someone else.

Not one to back down in the face of rejection, she emailed the producer directly, providing details about other times in her life where she’d been dismissed or rejected. She finished the message with “I consider your rejection a lucky charm,” and let them know she’d booked a flight to L.A. and would like another chance.

She landed the job.

It’s how you behave in the face of difficulty — not when everything is going your way —t hat matters. Without the trials and tribulations she faced, Corcoran may have never gotten to where she is today. Ultimately, while it may not feel like it at the time, you will endure, because you are capable and strong—even if you don’t see it.

“Endure” is exactly what Corcoran did when she took her rightful half of her first real estate business. Rather than mourning the loss of her former husband, she sought revenge in its best form: great success. It was her enduring spirit that led her to start the real estate firm that made her the $66 million she leveraged to become a Shark — the platform to which she credits a great deal of her current success.

The biggest takeaway from Barbara Corcoran’s rich life experiences is this: no matter how bleak things look or how many times you think you’ve failed, you’ve got to keep getting back up. No matter how hard, the only way to achieve success is to work through the repeated failures that life inevitably hurls your way.

This article was originally written by Alp Mimaroglu and appeared here.