$24.2M mansion includes a ballroom that turns into a swimming pool 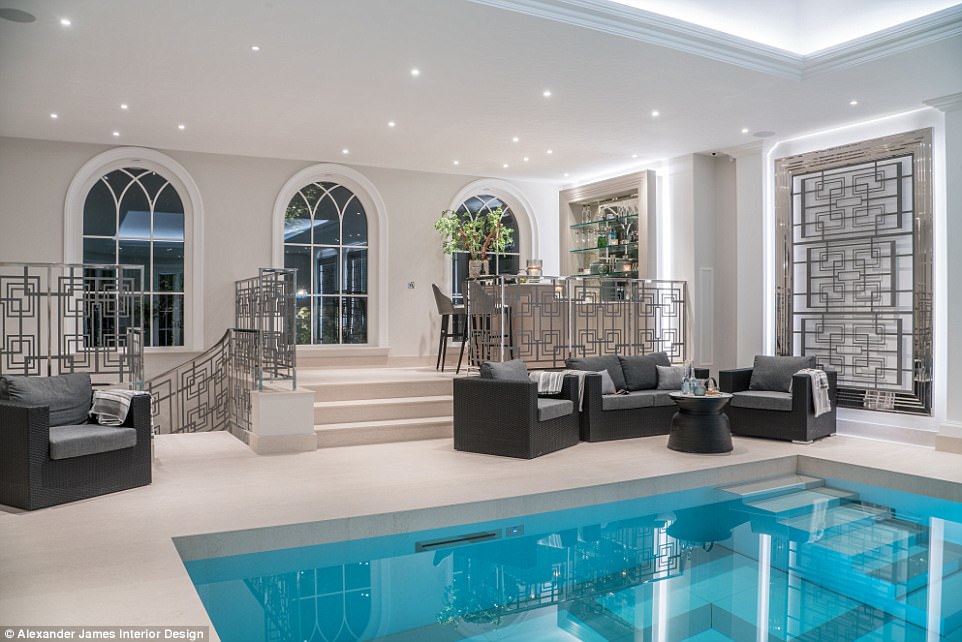 Imagine a house with almost every conceivable luxury and this $24.2 million property for sale in one of the most exclusive parts of the country must surely be close to the mark.

The brand new home in Surrey’s Weybridge is called Whitelands, and has some standout features that won’t be found in your average detached family home. 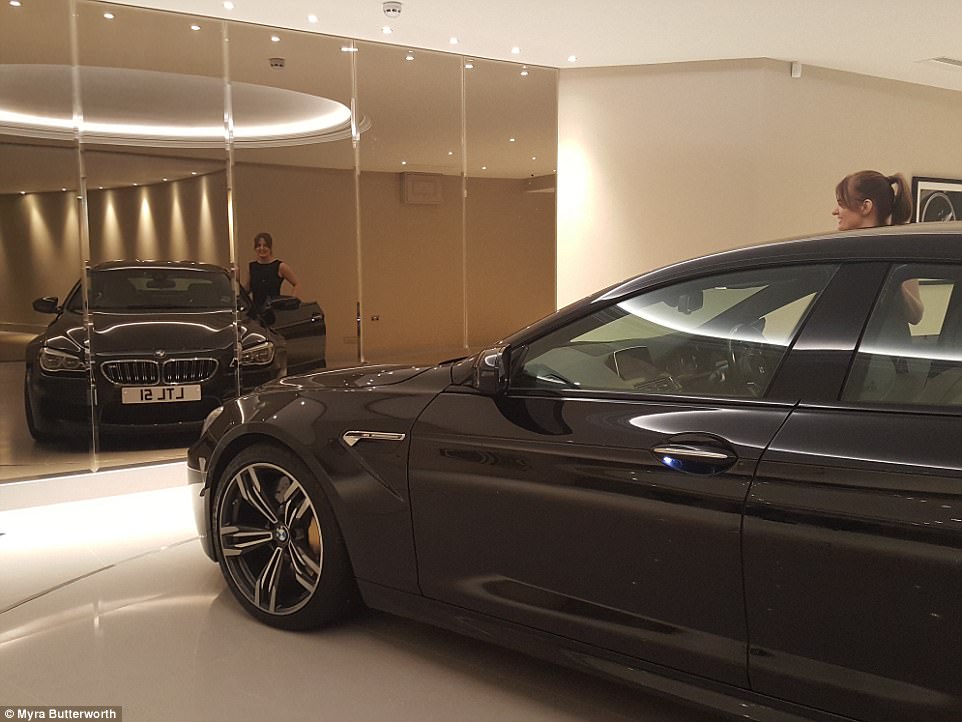 MailOnline Property’s Myra Butterworth tries out the turntable in the underground garage at the luxury house called Whitelands. 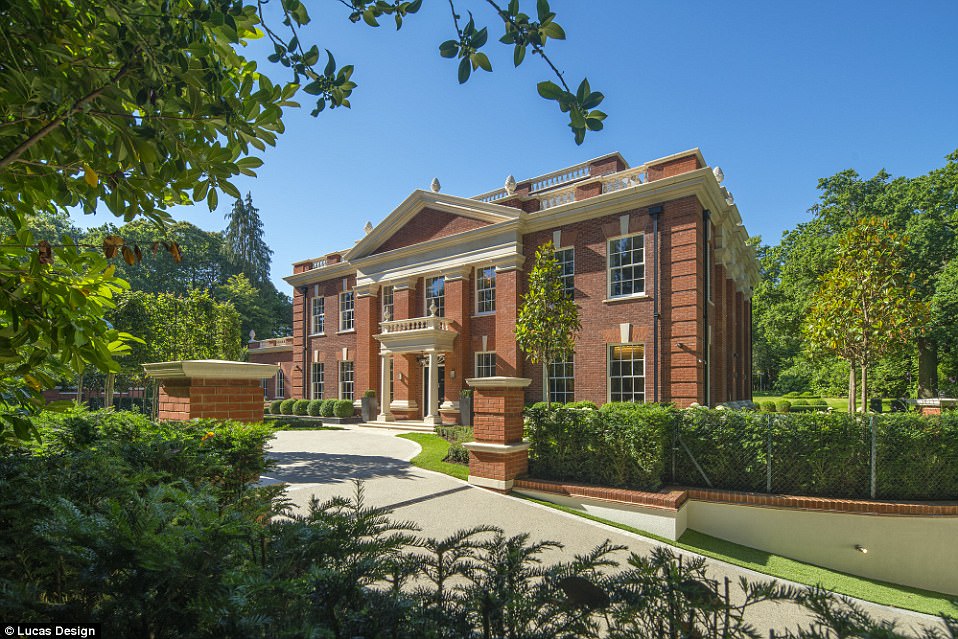 The property has a modern ballroom that transforms into a swimming pool at the touch of a button, taking just six minutes. 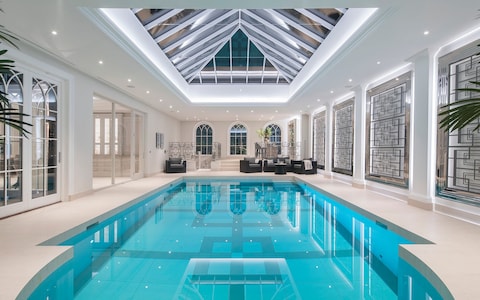 It takes just six minutes for flooring to lower and for the pool to fill up with water, to a depth of 1.85 metres – just long enough to sip on some wine from the poolside bar.

With five bedrooms, there is plenty of space for guests to stay overnight if they decide not to drive home after supper.

And they can store their car in the underground garage, which has a turntable to avoid having to reverse park into one of the parking spots.

Other features at the property include a cellar stocked full of wines and champagne, a cinema room, a games room, a gym, and a separate spa with a pool, sauna and steam room. 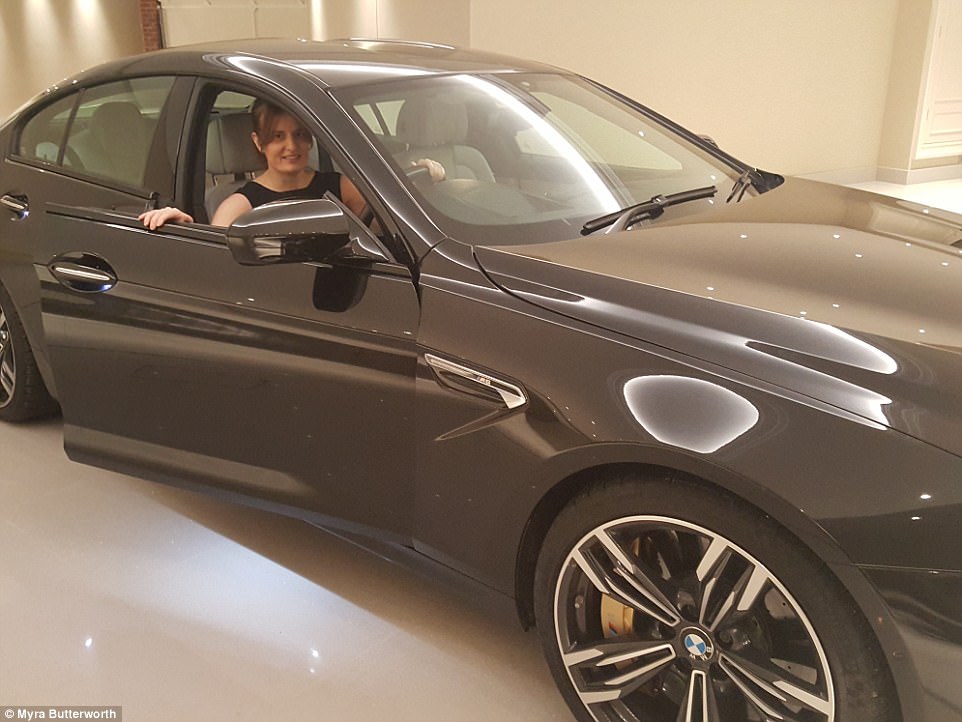 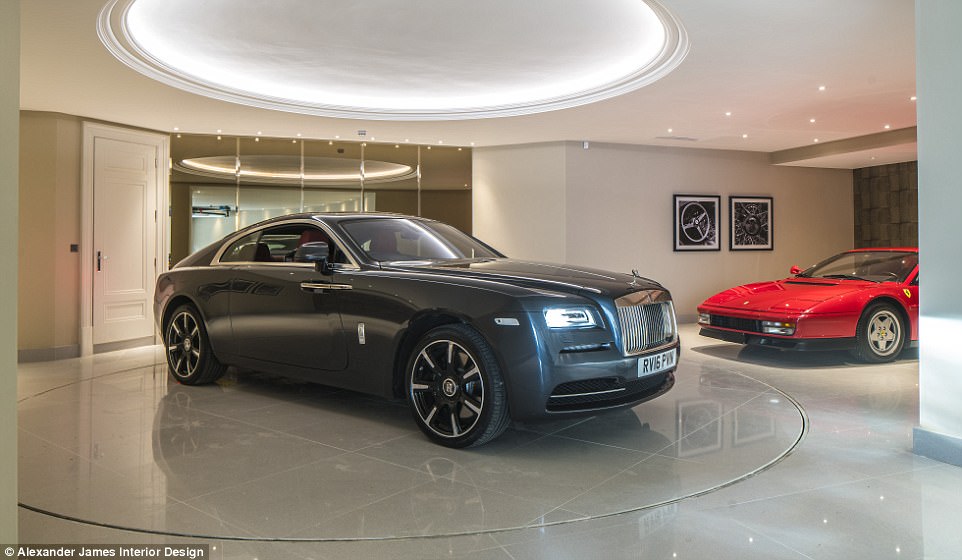 There is space for at least half a dozen cars to be parked in the underground garage, with the help of the turntable

The interior design budget excludes the cost of the swimming pool, wardrobes and the kitchen. 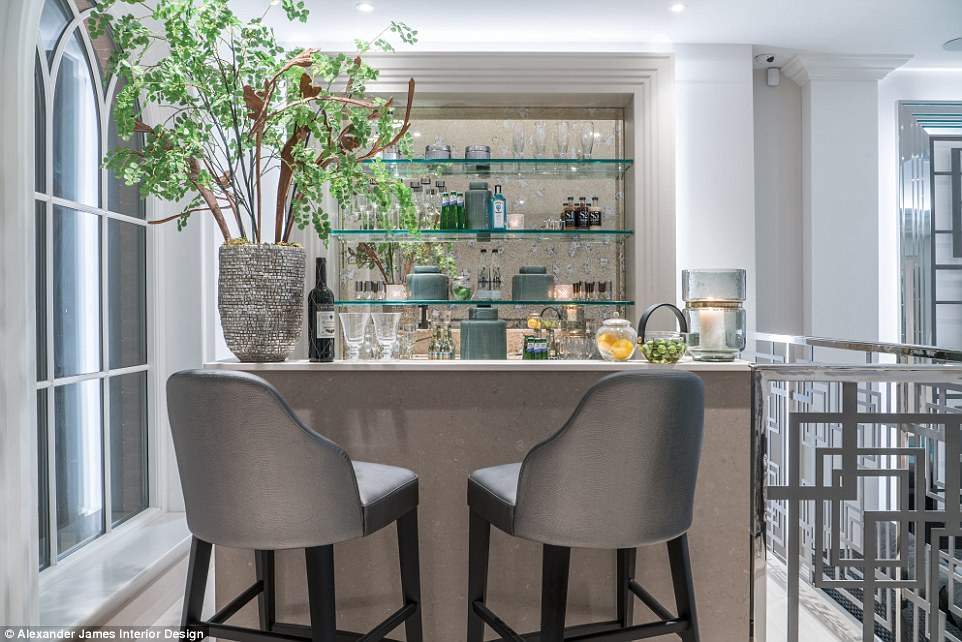 The kitchen has a large breakfast bar and units with luxury leather insets on the cupboard doors.

Anyone who is concerned that the leather will begin to discolor or smell amid the aroma of cinnamon risotto can rest assured that most of the cooking will be carried out in the separate staff kitchen.

The $24.2 million detached house also has separate staff quarters with their own entrance at the side of the property. 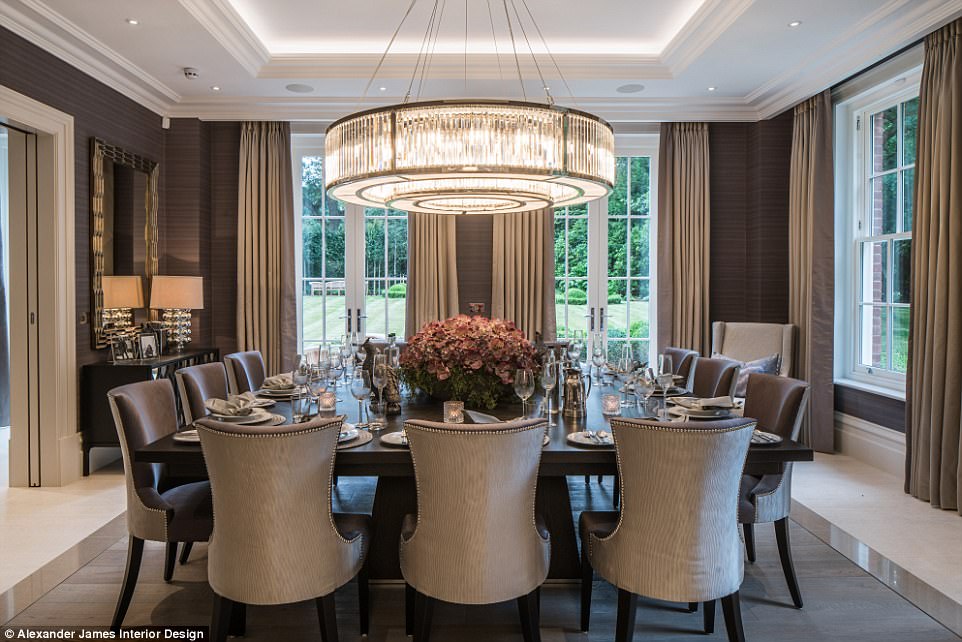 As well as a statement light, there is a bespoke dining table in the dining room that cost £8,000 and comfortably seats 12 people 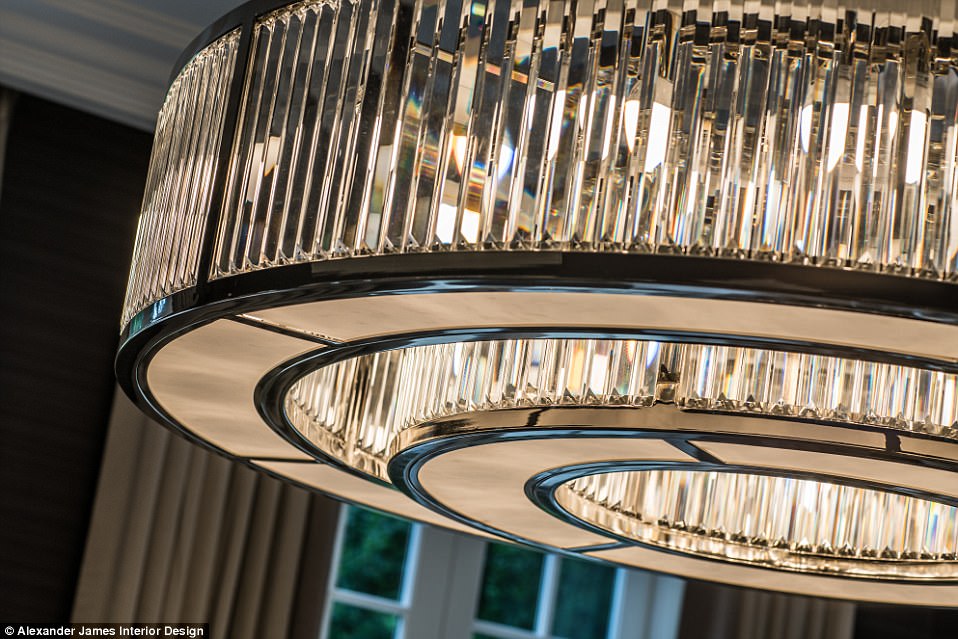 A total of £65,000 was spent on five statement lights throughout the property, according to Alexander James Interior Design 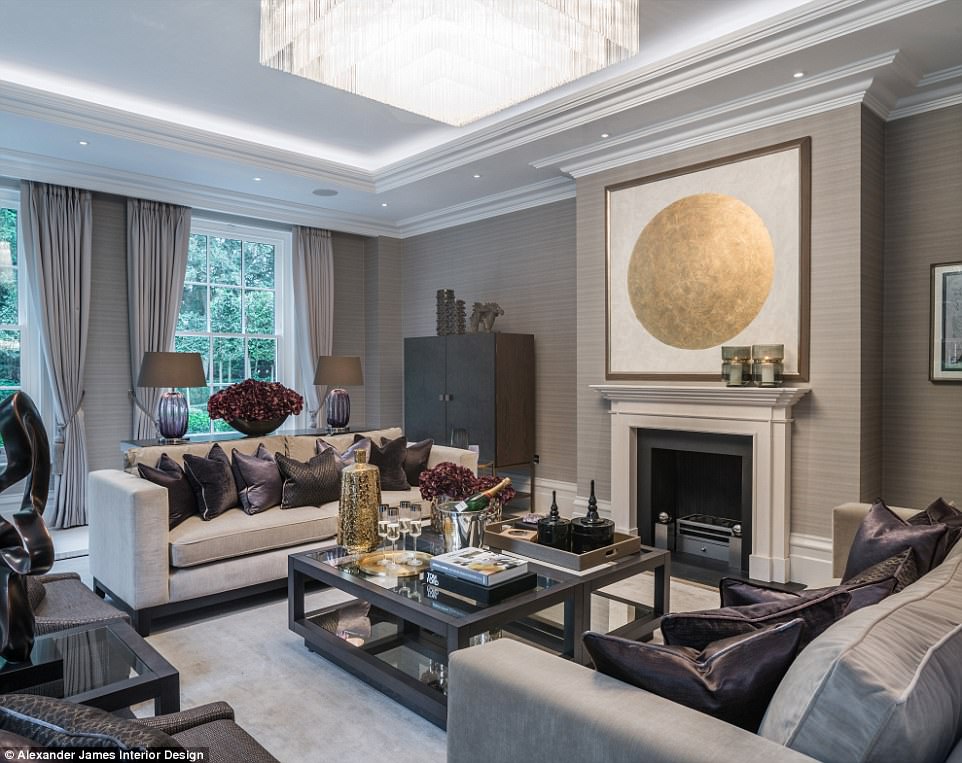 Various tactile fabrics are used throughout the luxury rooms include velvets, weaves and satins 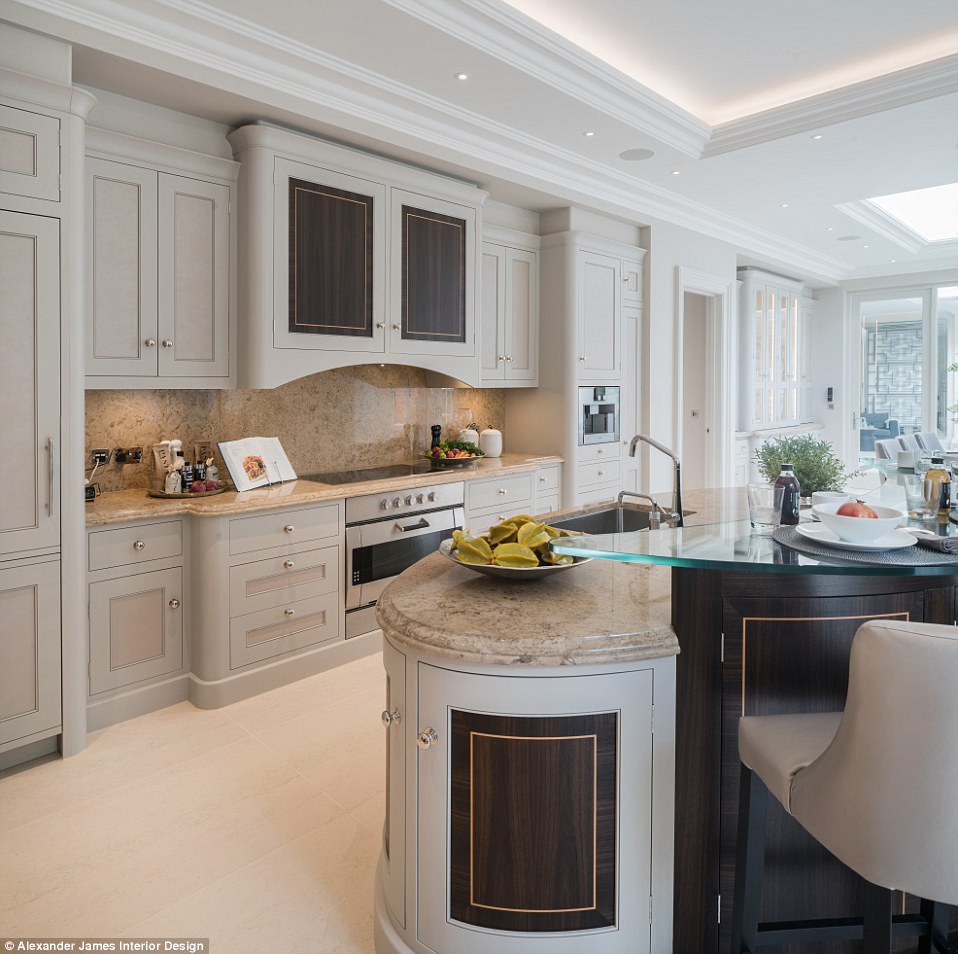 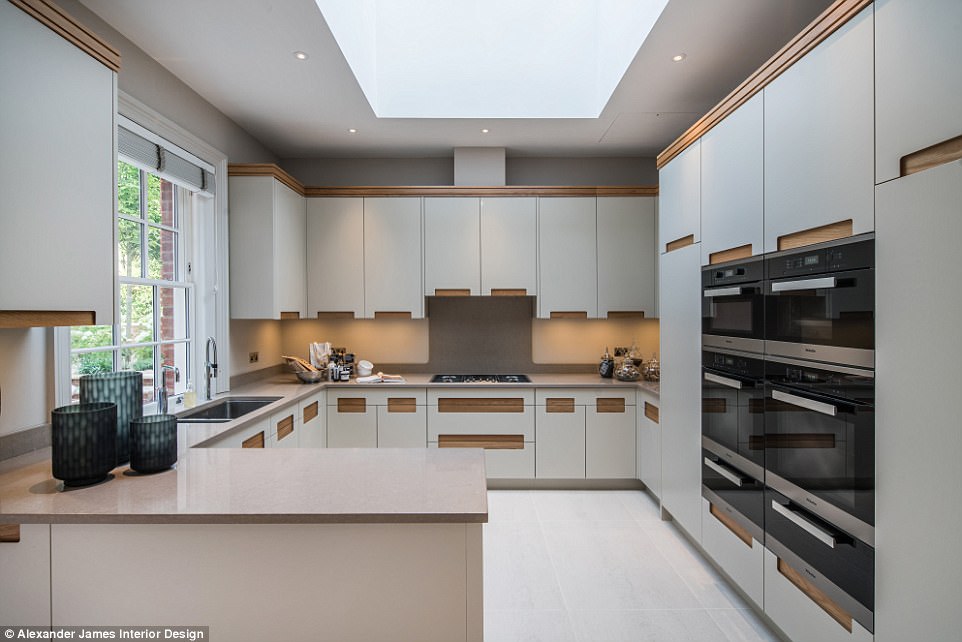 All of the mess is hidden! A staff kitchen is discretely tucked around the corner from the main kitchen

St George’s Hill is a 964-acre private estate with security guards and CCTV, 420 houses, and its own golf and tennis clubs.

It is the district of Elmbridge, an area dubbed Surrey’s Beverley Hills due to its abundance of large multi-million pound properties belonging to footballers and celebrities. 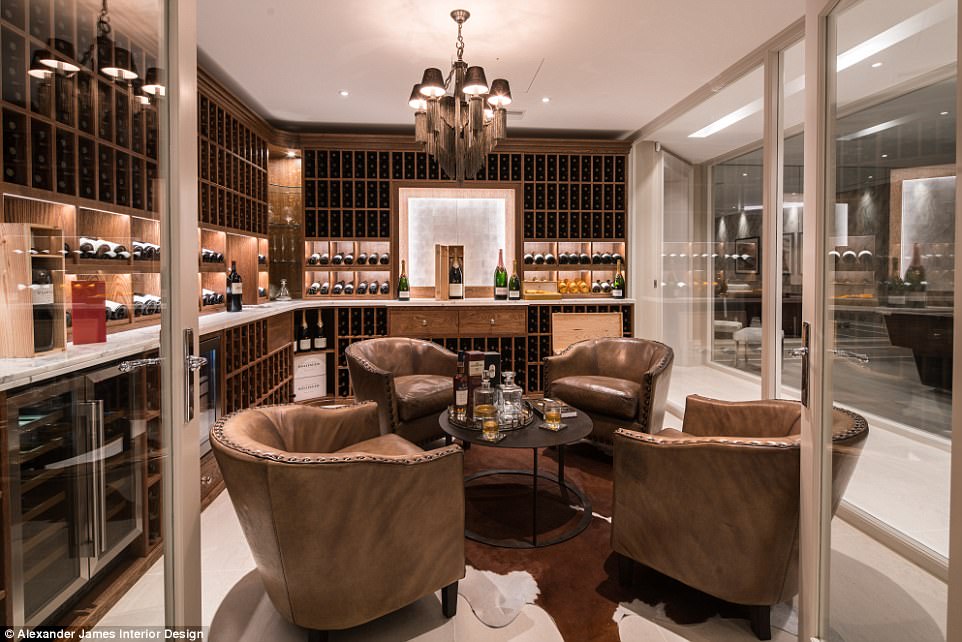 There is plenty of wine, port and champagne in the wine cellar, which has a extractor fan for those smoking cigars 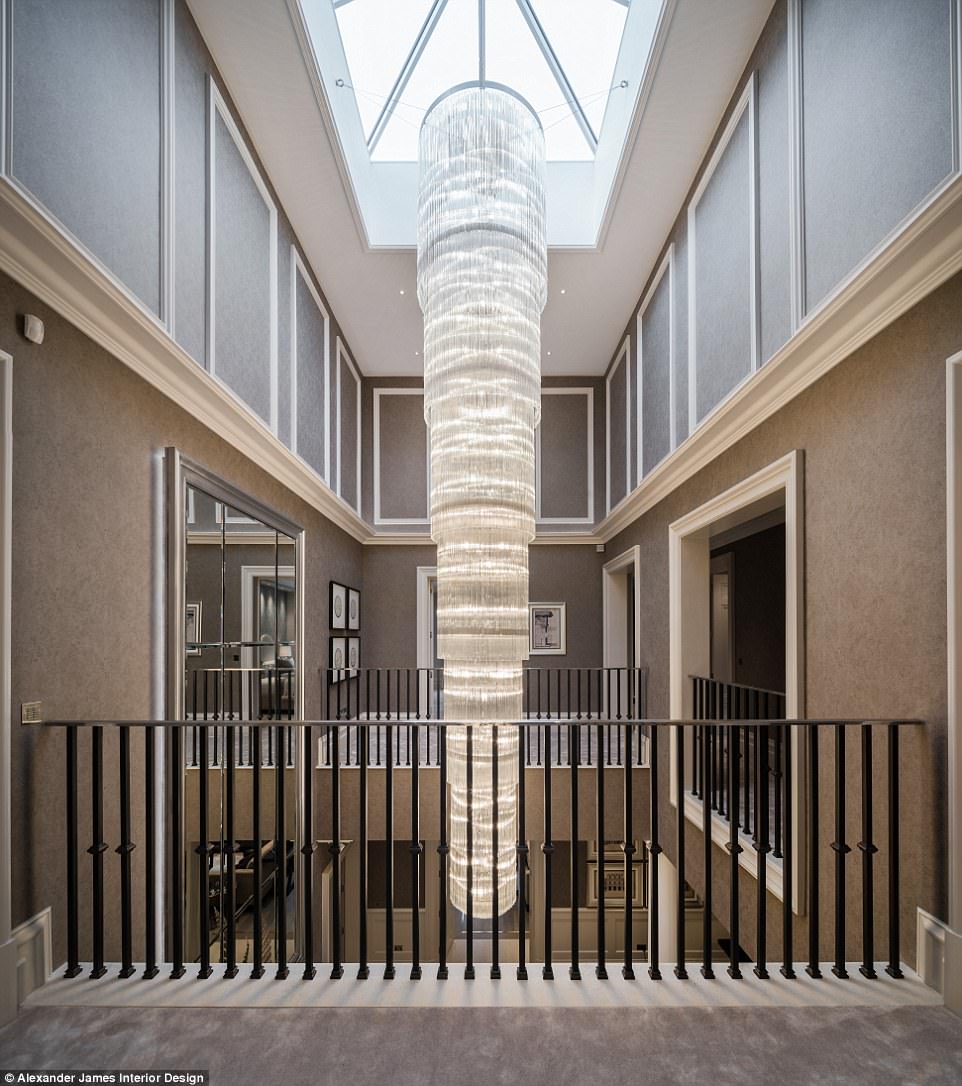 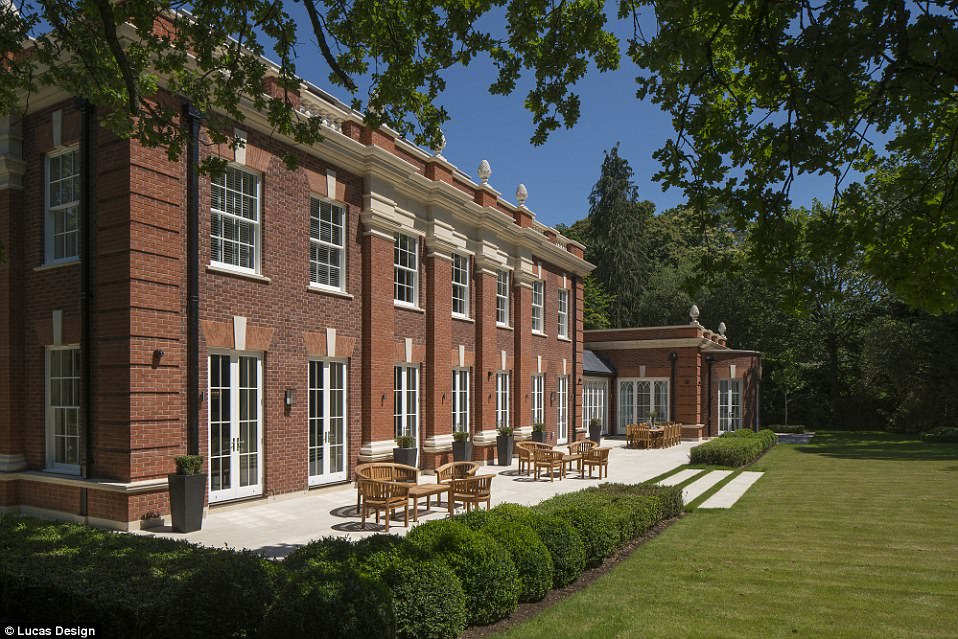 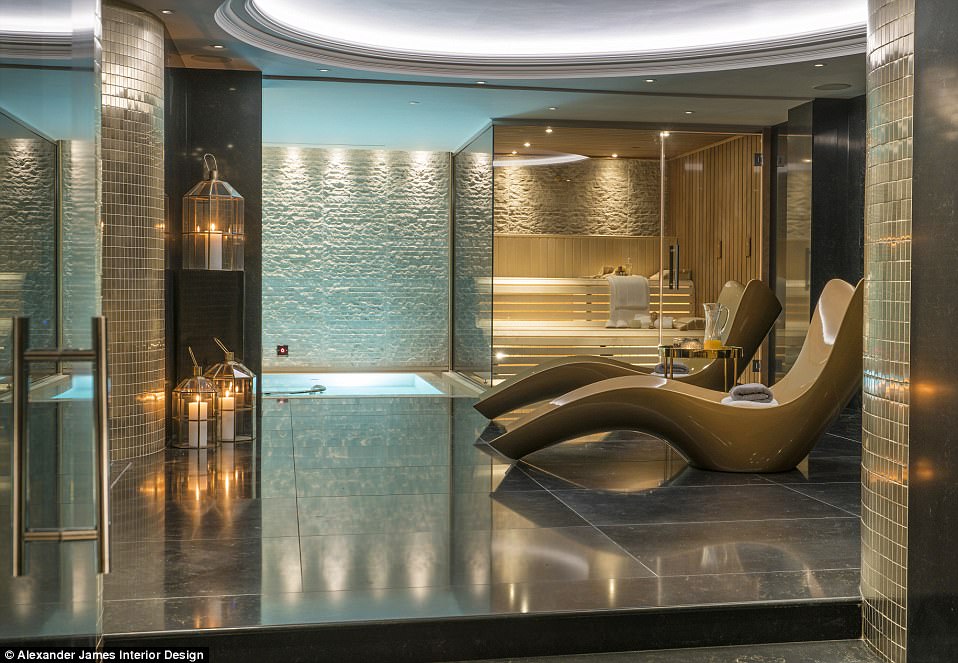 The separate spa area includes a spa, plunge pool and a large seating area for relaxing 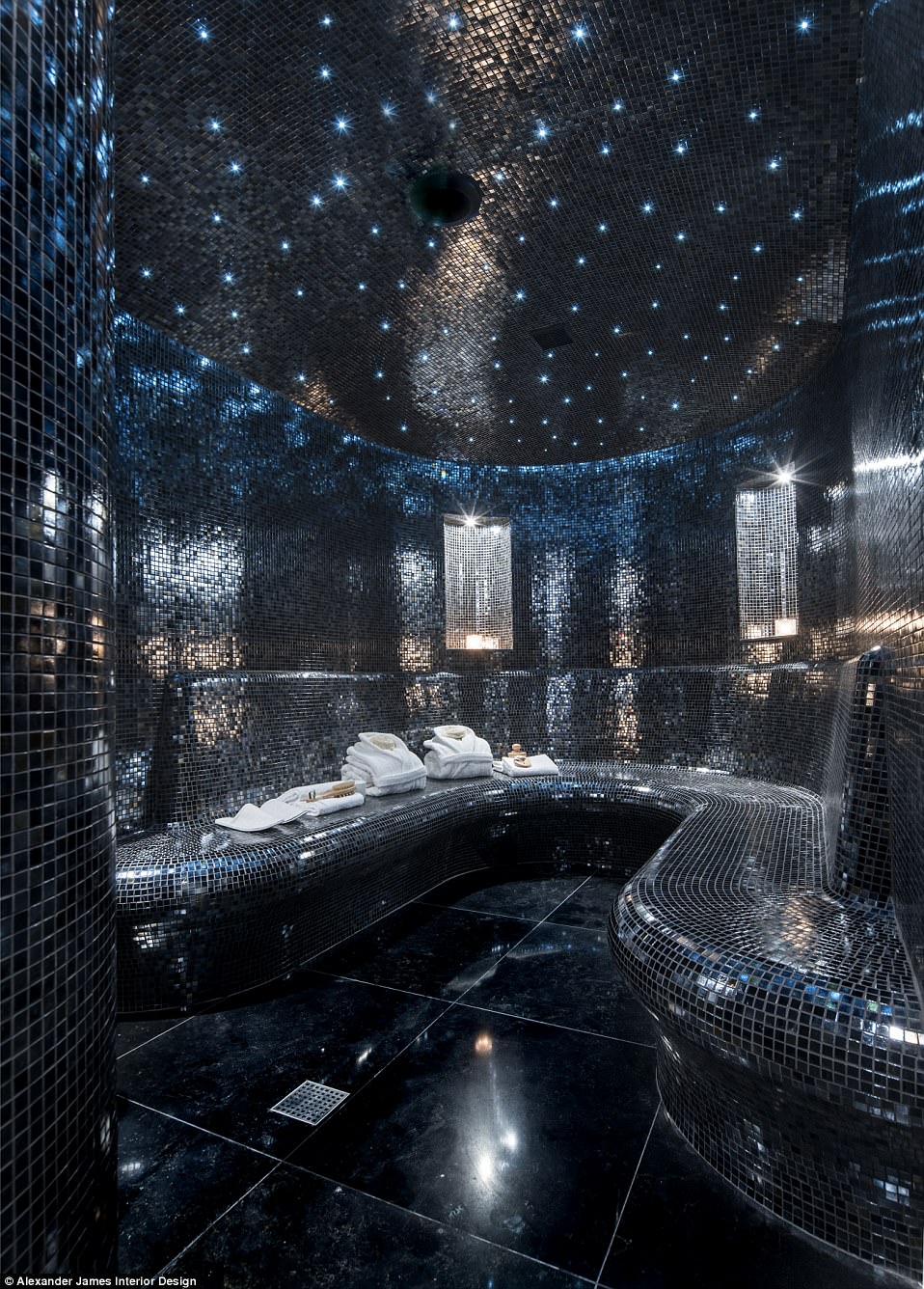 Karina Sundgren, of Alexander James Interior Design, said: ‘Whiteland’s struck us instantly with its beauty and grandeur. With a property of this magnificence, we felt that it was so important to do it justice with our interior design.

‘We didn’t want the scheme to take the attention away from the architecture, we wanted it to embellish and accentuate it. With such huge and open spaces, we were conscious that the space might feel intimidating and overwhelming to potential buyers, so we wanted to create a scheme that would make it feel cosy and homely while remaining luxurious and opulent.’

She added: ‘I wanted to create a timeless elegance by using a neutral warm palette, with hints of heather and aubergine. Colours that will not date or offend. I wanted richness and depth in the fabrics too so I selected tactile ones like velvets, weaves and satins.’ 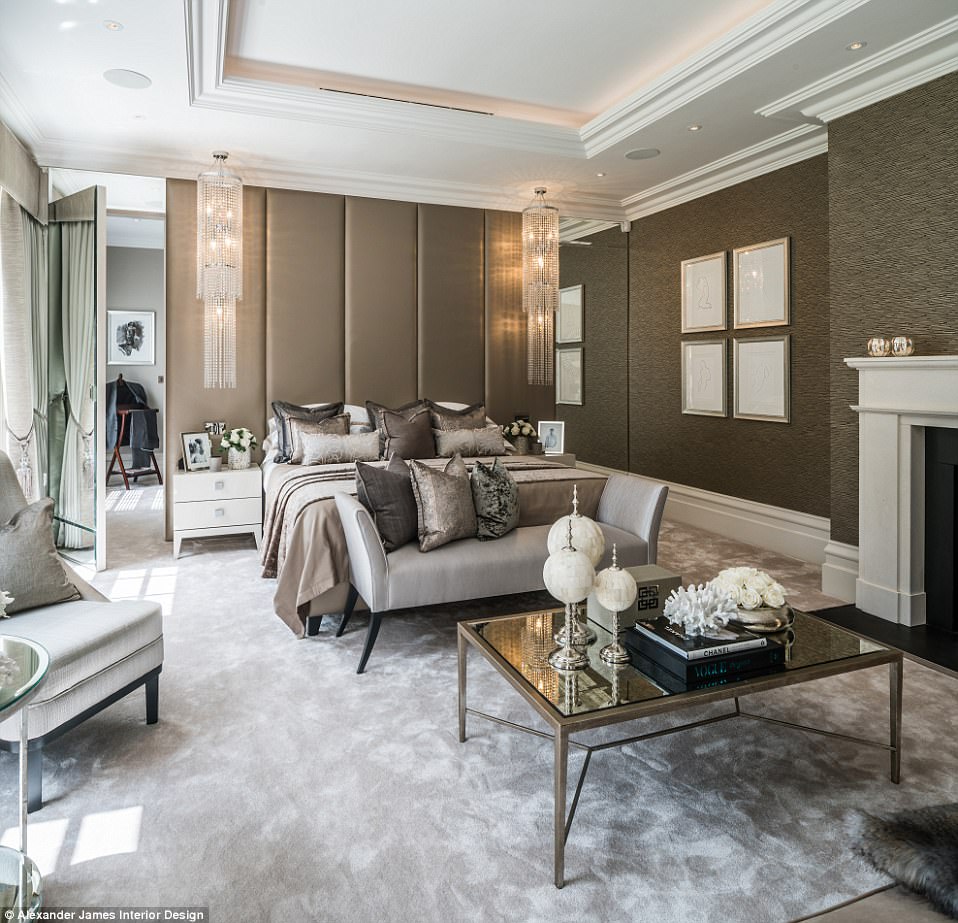 The secret to a healthy marriage? The master bedroom has ‘his’ and ‘her’ dressing rooms and ensuite bathrooms attached 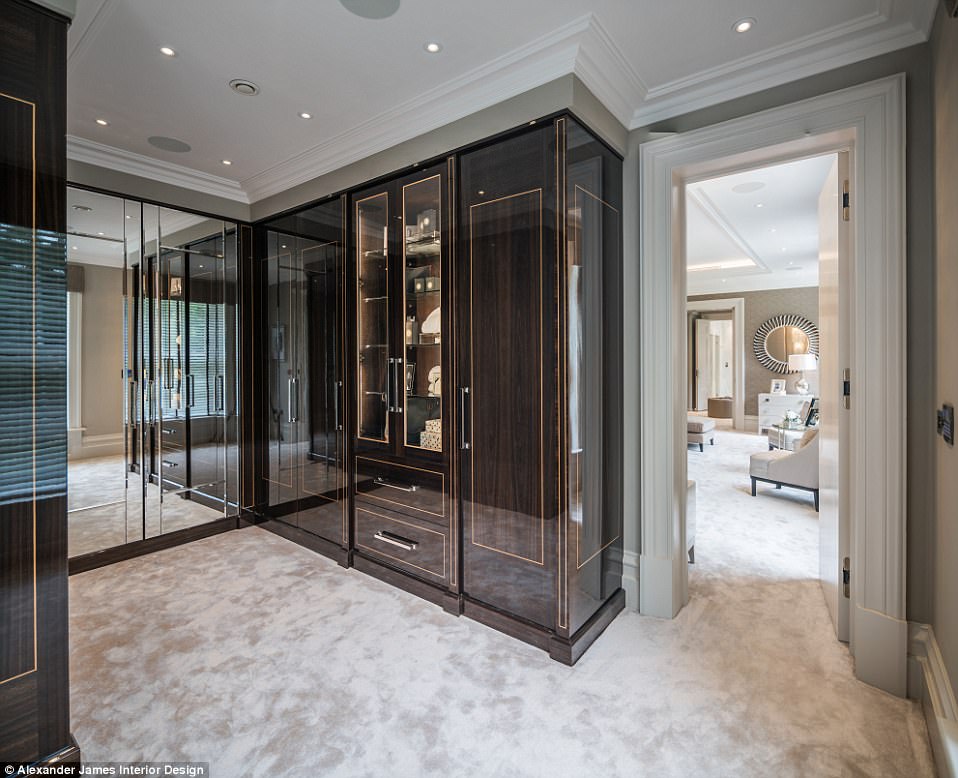 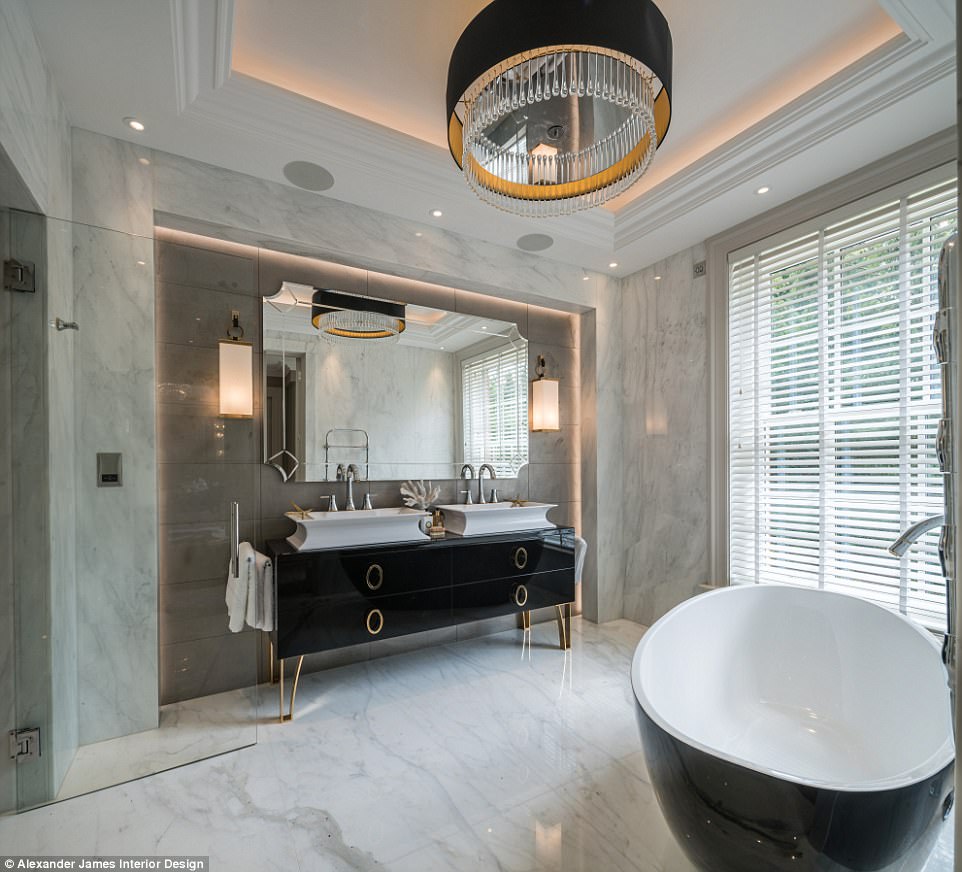 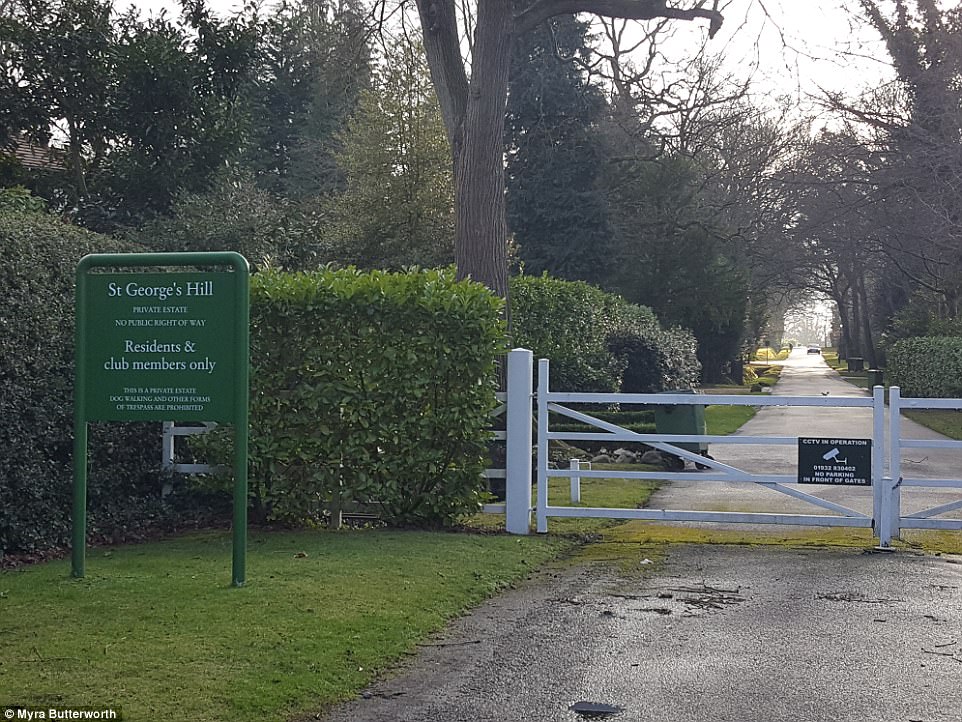 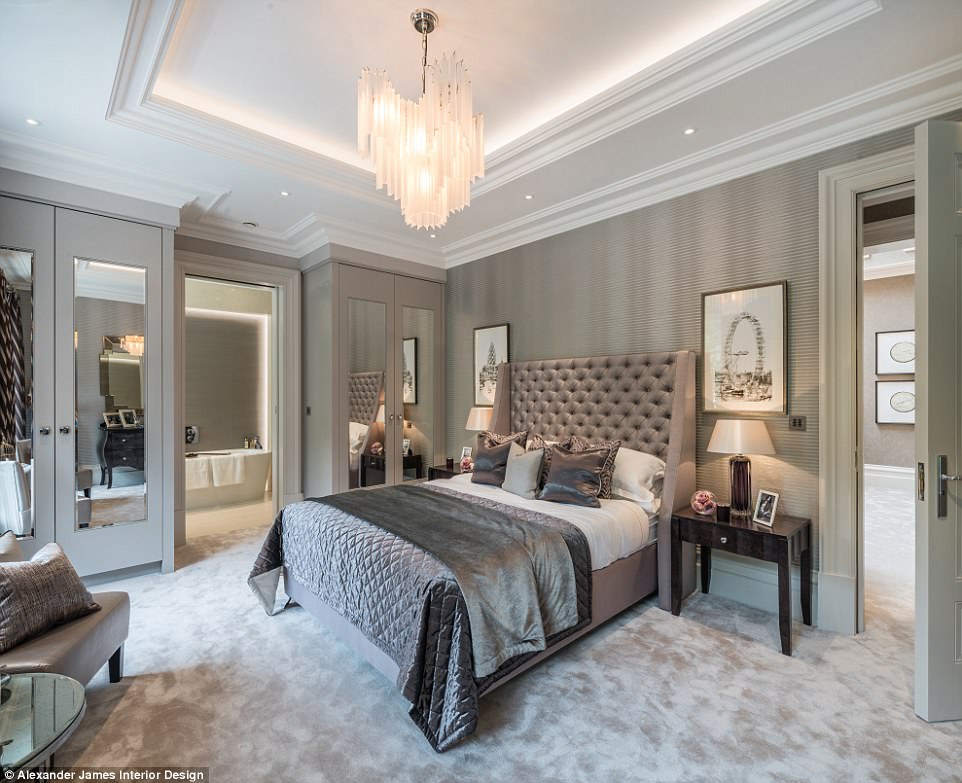 There are five double bedrooms in total, plus separate staff quarters that include one bedroom

This article was originally written by Myra Butterworth and appeared here.