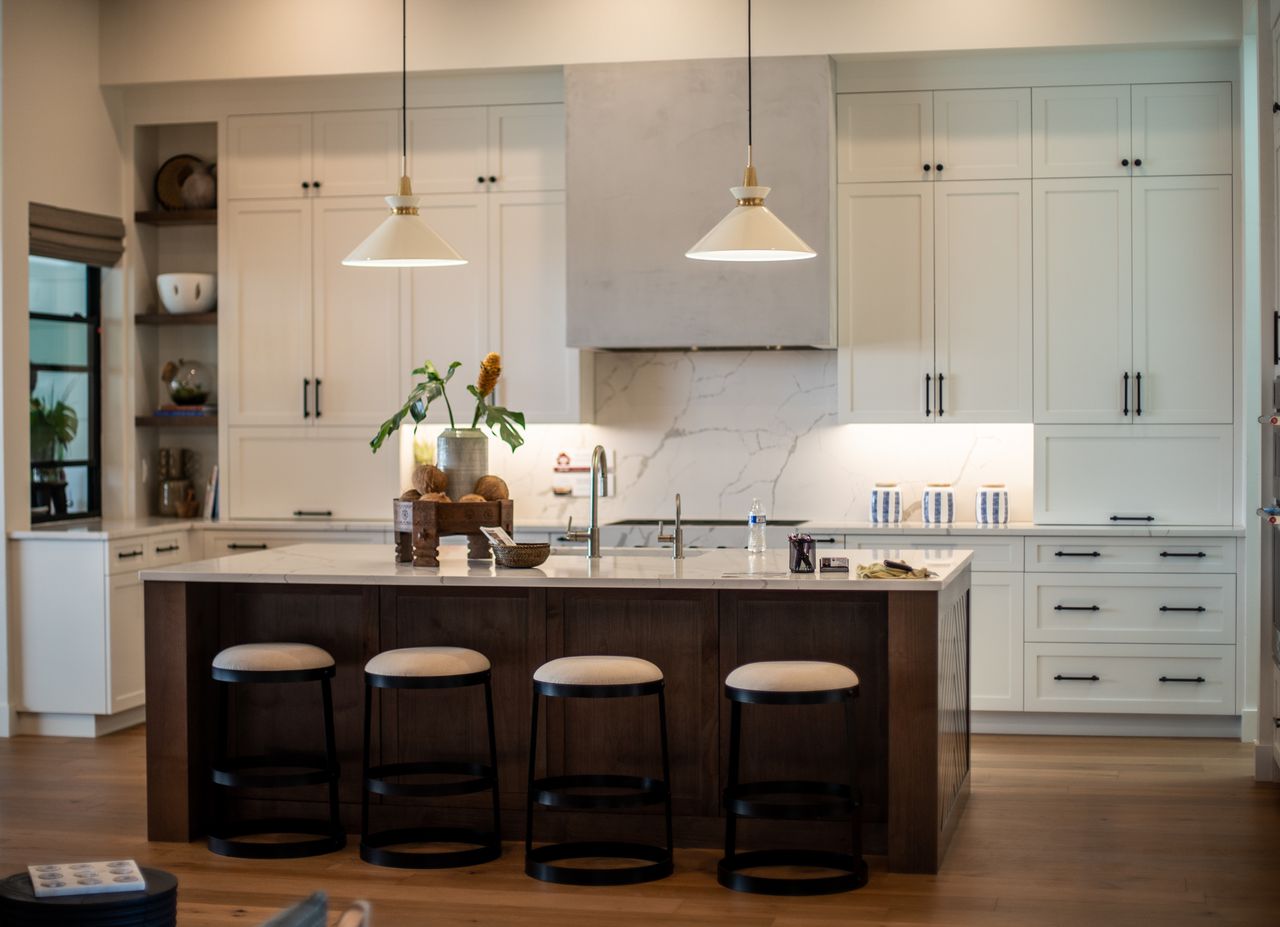 The expert-driven trends below for 2022 are really more than just trends. Granted, there are a few mixed in just for the pretty factor they provide but the majority of these new kitchen upgrades are a prime example of our collective shifting priorities amid life in (and after) a pandemic.

From the return of color—and a reinvigoration of a positive perspective—to the prioritizing of natural materials and do-it-all finishes, they encapsulate a time and a place that is filled with love, laughter, and yes, good food—just like a kitchen (and life) should be.

The already high cost to upgrade a kitchen continues to climb, according to remodeling resource Houzz, which has just released its latest kitchen trend report.

The median spend for a major kitchen remodel, in which cabinets and appliances are replaced, increased 10% to 14% in mid-2021, compared to 2020, according to the U.S. Houzz Kitchen Trends Study.

The cost for a major remodel of a smaller kitchen is $35,000 while homeowners might pay $50,000 to improve a kitchen with more than 250 square feet of space.

A minor kitchen remodel rose in cost by 25 percent to $10,000, said Houzz, an online resource with content by more than 2.7 million home remodeling and design professionals, including kitchen and bathroom remodelers, kitchen and bathroom designers, architects and general contractors.

Costs have increased for the fourth year in a row, the study revealed. During the coronavirus pandemic, expenses jumped due to labor shortages and tariff- and pandemic-induced spikes in prices for products and materials.

Despite escalating expenses, however, people are investing in the busiest room in the house. Kitchen islands now stretch seven feet long and have become the preferred study and work-from-home space.

Homeowners are splurging on engineered quartz and granite counters, designer light fixtures and a beverage fridge within reach, according to the survey of nearly 2,400 homeowners and Houzz users who are in the midst of, planning or recently completed a kitchen renovation.

Houzz senior economist Marine Sargsyan said in a statement that major modifications are being made to the kitchen layout, systems and walls, which is work beyond the skills of most do-it-yourself homeowners.

Among homeowners changing their floor plan, the L-shape layout is most popular (40%), followed by the U-shape (31%) and the galley style with two facing walls (13%). One in 10 renovating homeowners modifies the kitchen ceiling.

A surprising dip: Fewer people are removing interior walls to open up their kitchen or making accessing an outdoor space easier by installing double doors or a row of doors than in the past three years.

Finally having the funds to improve their kitchen is the reason almost half of the surveyed homeowners started their project. Another strong motivation was that their old kitchen had deteriorated and was in need of repair.

The transitional style, which works well in most homes, remains the top choice for renovated kitchens, up to 25% from 21% the previous year, according to the Houzz study.

Contemporary style has overtaken modern as the second most popular pick, and the farmhouse look is chosen by one in 10 kitchen renovators, a drop of two percentage points from the previous year and declining further from its peak of 14% in 2019.

White continues to lead as the color for kitchen cabinets, backsplash and walls (41%, 40% and 32% respectively). Gray is the most common alternative to white, with 27% of renovating homeowners painting the kitchen walls gray, 13% installing gray flooring and 11% opting for a gray backsplash.

Splashes of color still appear, with 20% of renovating homeowners choosing a multicolored backsplash and 6% choosing blue.

Stained or unstained hardwood is the most popular kitchen flooring material among home renovators. Hardwood floors is installed 25% of the time, according to the Houzz survey.

Vinyl or resilient flooring, however, continues its ascent for the third year in a row, nearly doubling in popularity since 2019 to 23% and overtaking ceramic and porcelain tile (19%), which declined by five percentage points, causing it to fall from first place to third.

Appliances are the second most common feature that homeowners splurge on during a kitchen renovation.

For appliance finishes, standard stainless is the overwhelming favorite, with nearly three in four renovating homeowners choosing this option, up by three percentage points from the previous year.

Over a third of upgraded appliances include high-tech features. The most popular are wireless and smartphone controls. Color touch-screen displays are also gaining in popularity.

When it comes to electronic upgrades, Alexa and Google home assistants as well as charging stations are still nearly equally popular (41% and 40% respectively), while kitchen tablets have outpaced stereo systems (17% versus 10%).

Nearly one in five homeowners is incorporating beverage refrigerators in their renovated kitchens and 14% are adding wine refrigerators. This may be connected to the increase in homeowners who use their kitchens for entertaining (56%), up four percentage points over the past year.

This year, homeowners are also adding small appliances to their kitchens, with coffee makers (21%), air fryers (15%) and food storage containers (15%) being the most popular.

Other small appliances that make cooking and meal prep easier and are featured in upgraded kitchens include toaster ovens (12%), blenders (10%) and slow cookers (10%). Countertops are the most common feature improved during kitchen renovations. They were upgraded by more than nine in 10 homeowners and more than one-third reportedly splurged on these very visible surfaces.

Surveyed homeowners opted for materials based on the look and feel, durability and ease of cleaning, rather than cost, the study showed.

Engineered quartz and granite are the most popular countertop materials (42% and 24% respectively).

Of the more than one in five renovating homeowners who select an island countertop material as a contrast from their primary countertops, more than one-third choose butcher block or wood slab.

Aesthetically, homeowners increasingly choose white for their countertops during renovations (39%), followed by multicolored (24%). Gray seems to be falling out of favor, with only 12% of renovating homeowners opting for it, down from 15% in 2020.

“It is clear that homeowners are willing to spend a little more to get exactly what they want in countertops that are both beautiful and practical, despite rising prices of labor, products and materials,” said Sargsyan.

For backsplashes, ceramic or porcelain tile continues to dominate at 56%, more or less in line with levels from the past four years.

Marble is the second most popular kitchen backsplash material, chosen by 11% of renovating homeowners and up by two percentage points from the previous year.

Continuing last year’s trend, most homeowners upgrading the backsplash extend it from the countertop to the upper cabinets or range hood (66%). Still, nearly one in five only partially covers the same area.

One in 10 renovating homeowners takes the backsplash all the way from the countertop to the ceiling. Of the 94% of renovating homeowners who either replace all the kitchen cabinets (65%) or partially replace the kitchen cabinet (29%) as part of the kitchen renovation, the majority choose solid wood as the primary cabinet material (76%), followed by plywood (20%) and medium-density fiberboard (14%), the survey revealed.

While the majority of homeowners opt for materials based on the look and feel (78%) and durability (52%), two in five cited costs among the top three reasons for choosing their new cabinet materials.

Shaker-style cabinet doors are gaining ground, with 64% of renovating homeowners choosing it for upgraded cabinetry, up by eight percentage points from the previous year.

Flat-panel cabinets remain a distant second (17%), followed by raised-panel (13%), both down by four percentage points. More than two in five kitchen renovators choose custom cabinets and more than one in three opts for semi-custom.

The trend of adding built-in specialty organizers to cabinets continues. More than half of renovating homeowners add organizers for cookie sheets or trays, consistent with last year.

Deep drawers made strong gains, however, and are now chosen by 40% of those surveyed who upgraded their cabinets.

Utensil organizers are popular as well, chosen by 35% of renovators.

The most common specialty drawers remain pullout waste or recycling options (63%), but cutlery drawers and pull or swing-out drawers are both gaining in popularity. They’re now chosen by 40% and 38% of renovators, respectively. 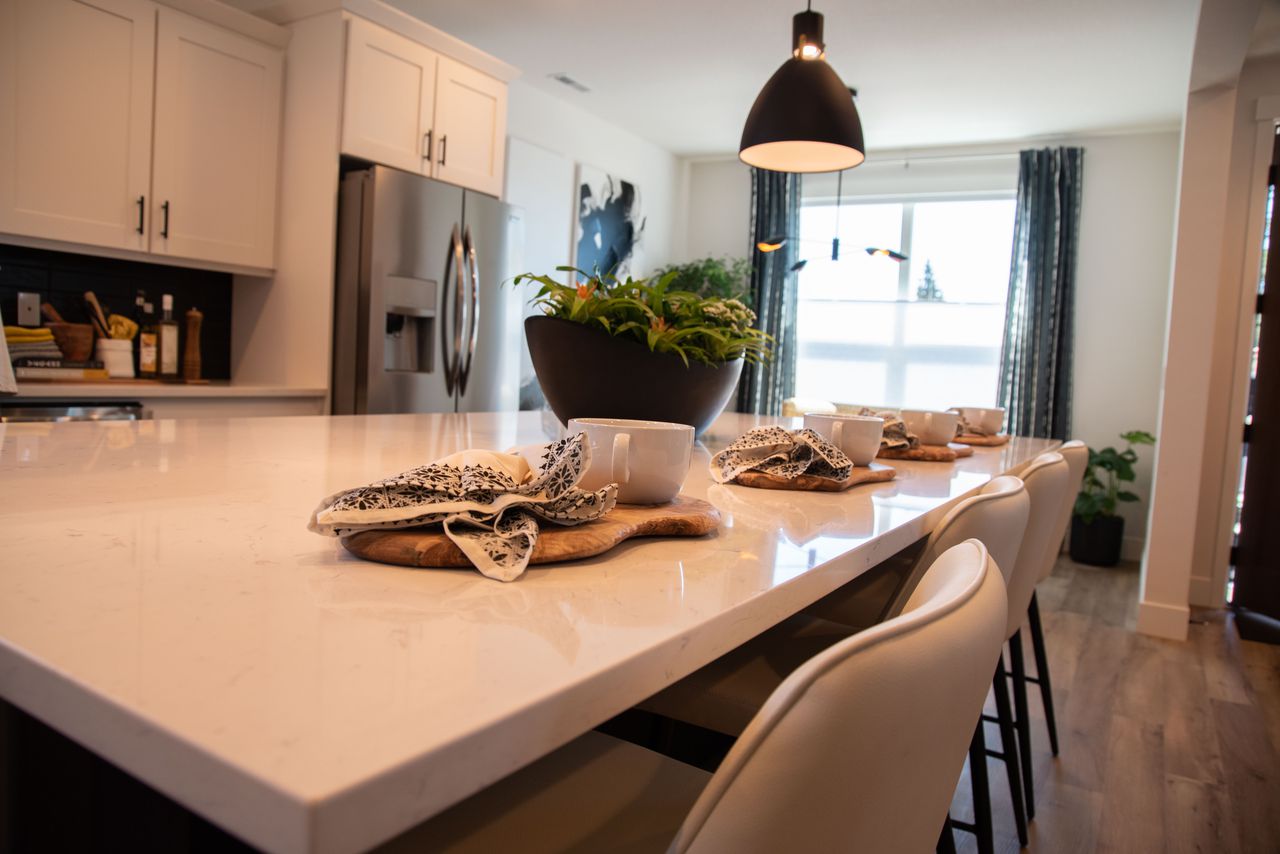 Homeowners are making space for islands, which are getting longer. Nearly two in five islands span more than seven feet in length. The space is brighter with the vast majority of people installing new light fixtures above the island.

Unsurprisingly, given pandemic-related changes in work arrangements, doing work is the top activity at the island for one in five people.

The most common island shape is rectangular (78%). Rectangular and square islands together account for 84% of upgraded islands. Demand for U-shaped islands declined to 4% this year, from 6% the previous year.

More than half of renovating homeowners either upgrade or add an island, while nearly two in five still have no island at all.

Islands are a common place to add kitchen storage; the most common storage types are cabinets with doors and drawers (74%). Open shelving is less popular this year.

Using a cabinet color or cabinet door style on the island that contrasts with the main cabinets is increasingly popular.

Lighting and other upgrades More sinks, faucets, light fixtures and interior doors are also being upgraded this year than in the previous year, according to the Houzz survey.

Among homeowners upgrading kitchen light fixtures, pendant lights made strong gains in popularity, with 57% choosing them. More than one in five homeowners selects a chandelier for kitchen lighting.

Under-cabinet lights and recessed lights continue to vie for the top spot (67% and 66% respectively).

For illumination above the island, 39% of renovating homeowners install two fixtures, followed closely by three (36%). One in 10 people installs four or more lights.

Most people who upgrade their kitchen report that they added new décor or furnishings to the space. The most popular new addition are bar stools, followed by wall art (48%) and window coverings (38%).

Nearly one in three homeowners adds plants or greenery to the new kitchen space, similar to the trend in bathroom renovation.

This article was originally written by Janet Eastman and appeared here.