20 of the world’s most amazing engineering feats Skyscrapers are reaching for new record heights, huge tunnels are establishing new transportation connections, and colossal bridges are spanning greater distances than ever before. Around the world, gigantic engineering and infrastructure projects are opening up or are closing in on their completion.

It took forty thousand construction workers a decade to build one of the Seven Wonders of the Modern World, Itaipu Dam. At almost 200m tall, ten times as heavy and eighteen times the size of Hoover Dam, it’s the world’s largest operating hydroelectric facility in terms of annual energy generation (though the Three Gorges Dam beats it in terms of capacity). 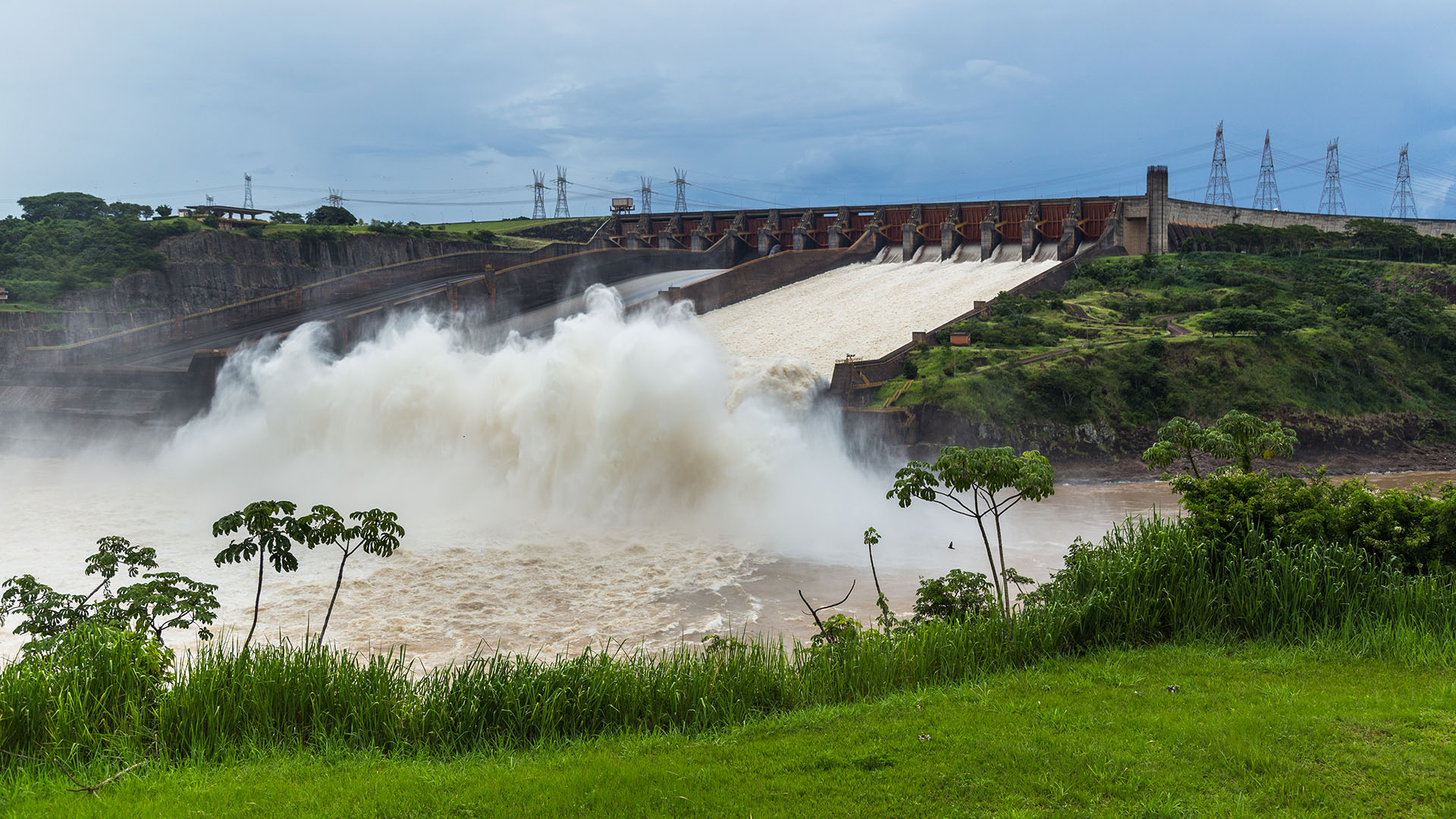 The world’s largest irrigation project supplies 6.5 million cubic metres of fresh water – to coastal Libyan cities – from huge, ancient underwater reservoirs in the Sahara Desert. The immense project cost more than US$25 billion and uses 2820km of pipes and 1300 wells, most of which are over half a kilometre deep. 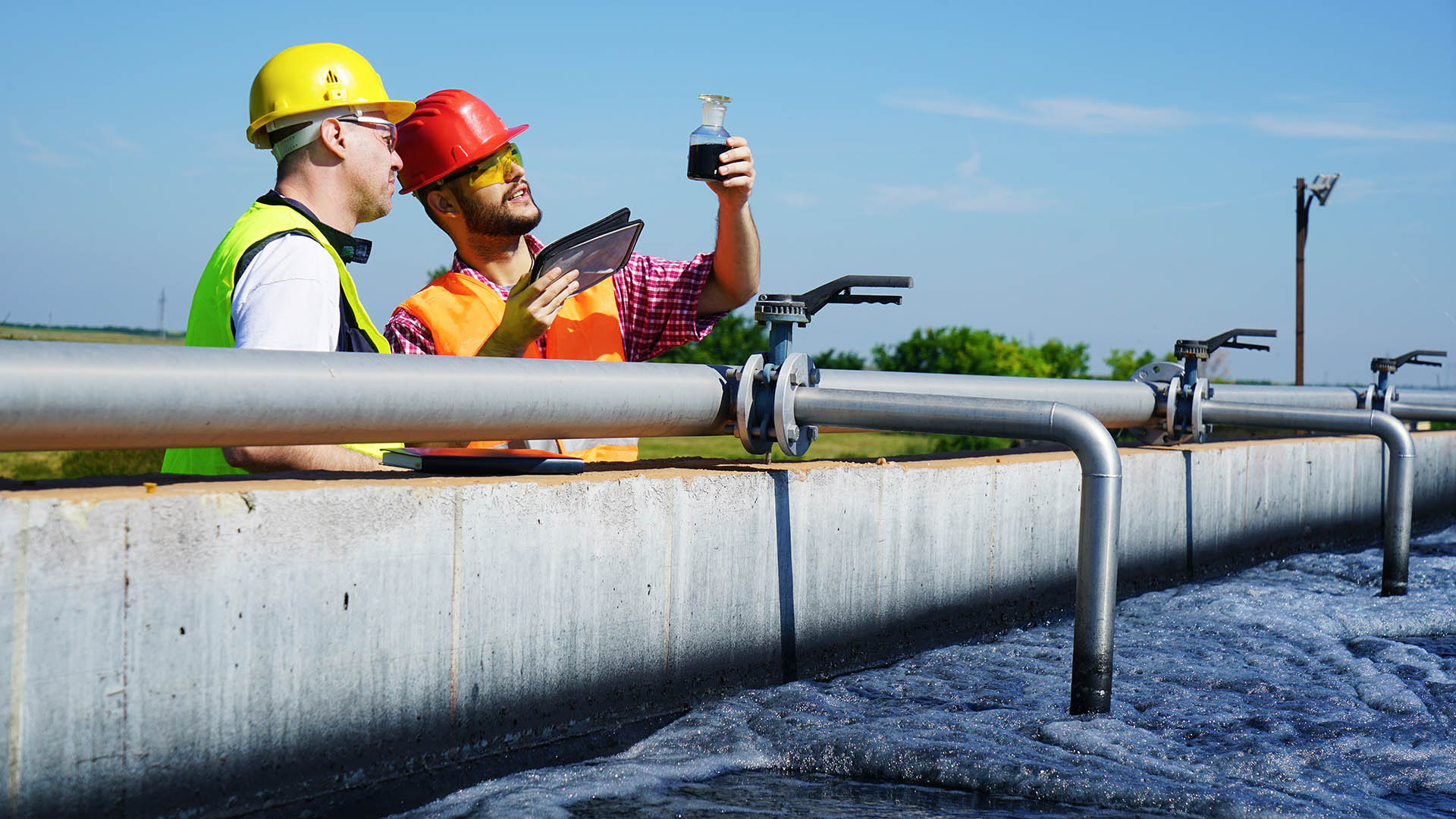 Linking Kobe on the Honshū mainland to Awaji, an island in Japan’s Inland Sea, Akashi Kaikyo is the world’s longest suspension bridge; the central suspended section is almost 2km long, and makes up half the length of the entire structure. It took two million workers and a decade to build, and the steel cable used to construct it would encircle the Earth just over seven times. 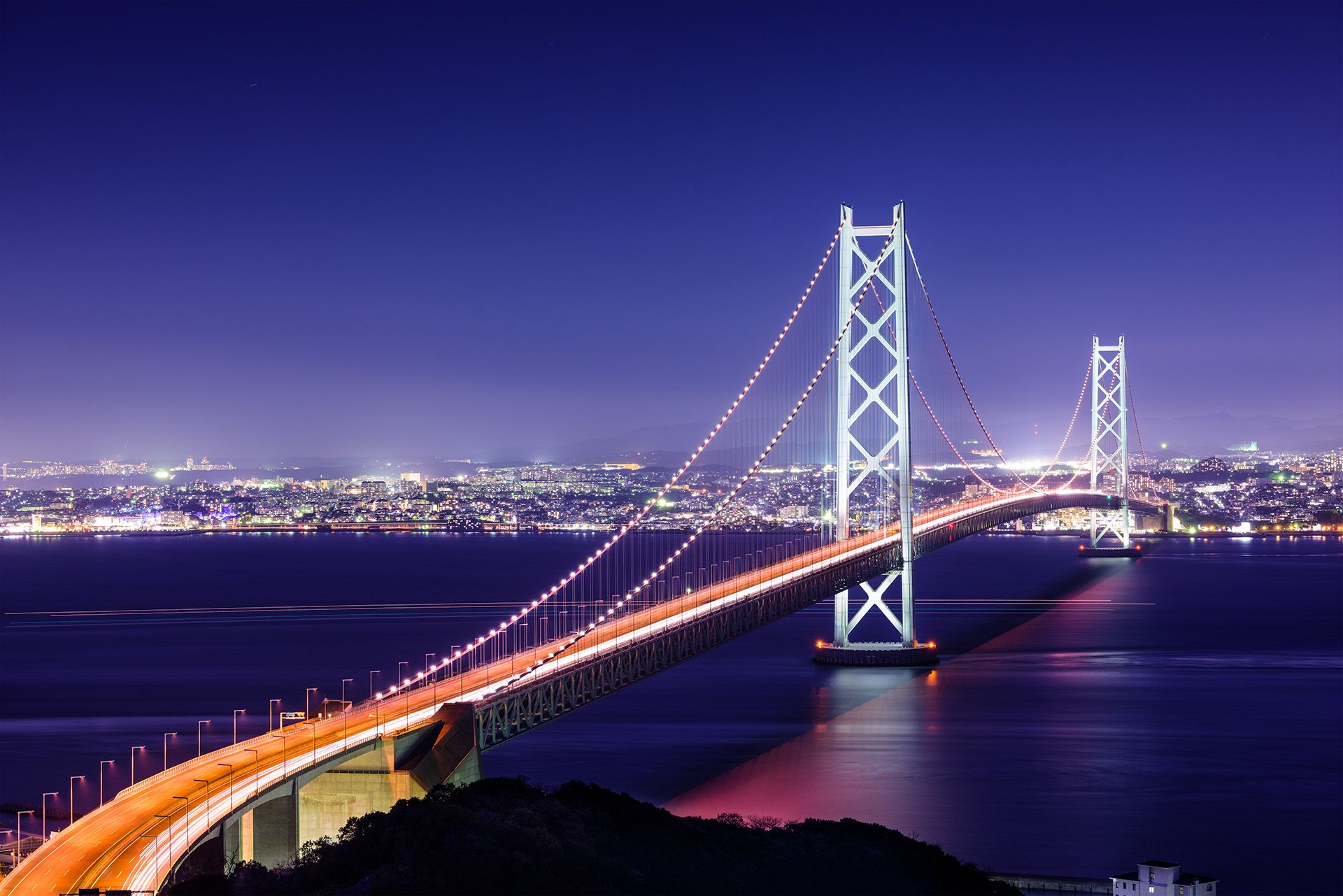 The Skywalk is a horseshoe-shaped, glass-bottomed structure jutting out twenty horizontal metres over the side of the Grand Canyon, 1450m up from the canyon’s base. Opened in 2007, this technical masterpiece was constructed from special glass imported from Germany, on which people can safely walk to take in spectacular (and terrifying) views. 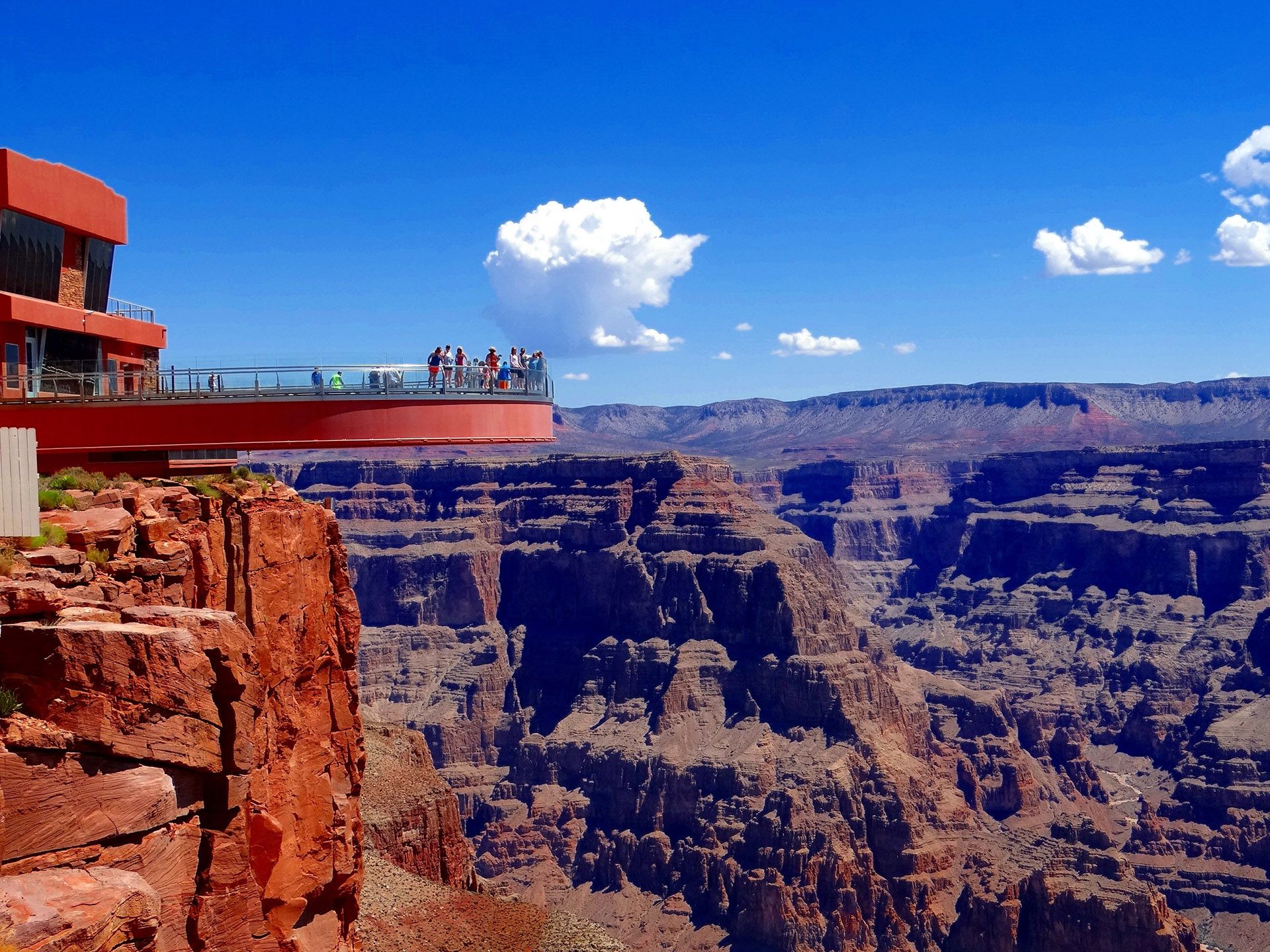 The Qinghai–Tibet Railway is the first railway to connect Tibet to any other province. The railway boasts the world’s highest track at the Tanggula Pass section, a staggering 5072m above sea level. Constructing the railway at such altitudes, unsurprisingly, caused some problems, and air inside the train carriages is supplemented with extra oxygen to help keep passengers breathing normally. 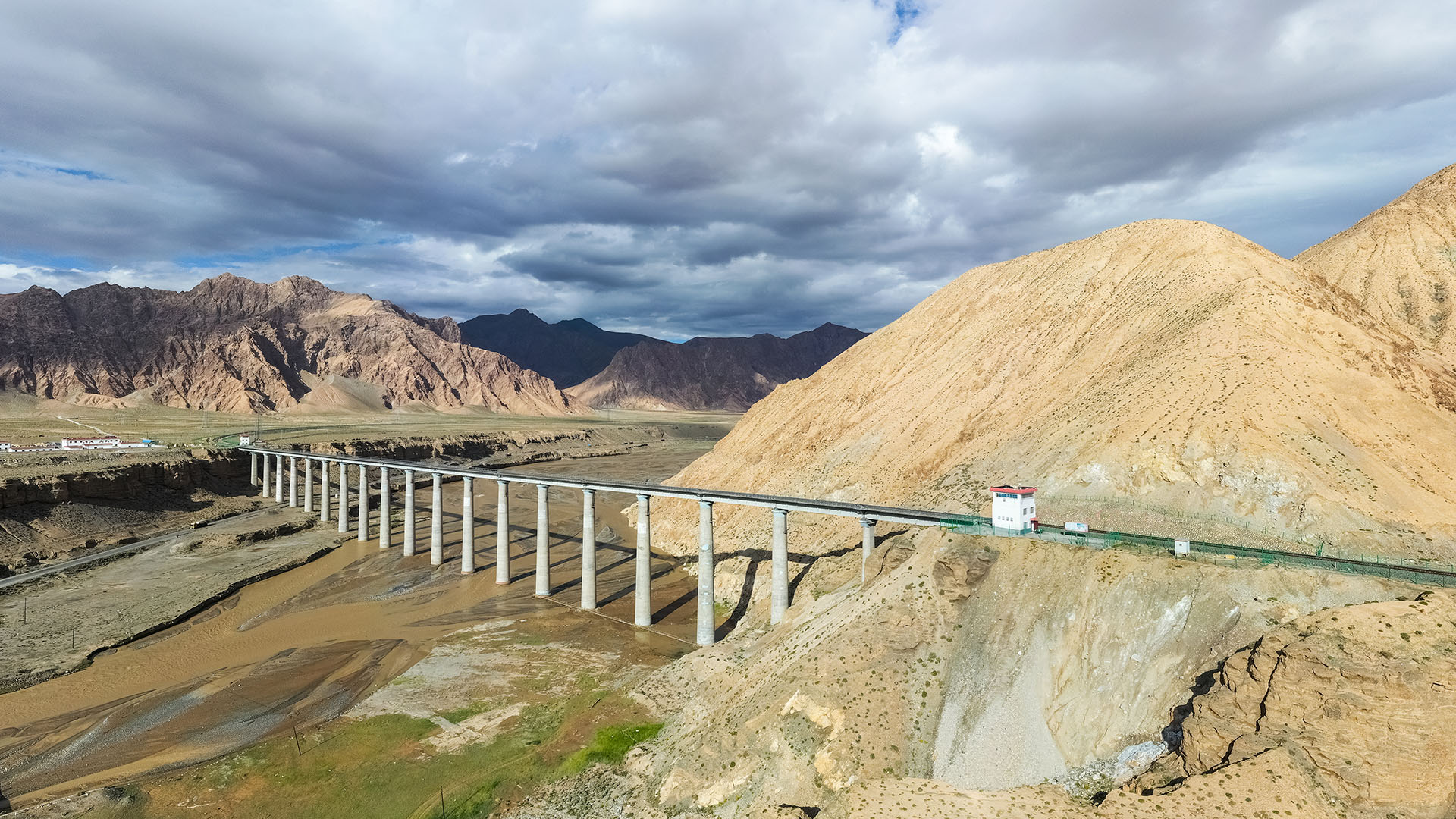 The largest man-made archipelago in the world, the Palm Islands, in Dubai, take their name from the shape of the islands, rather than the flora on the islands themselves. Only Jumeirah Island is open to the public, where you can stay in a number of luxury resorts, built on 94 million cubic metres of sand and 7 million tons of rock. 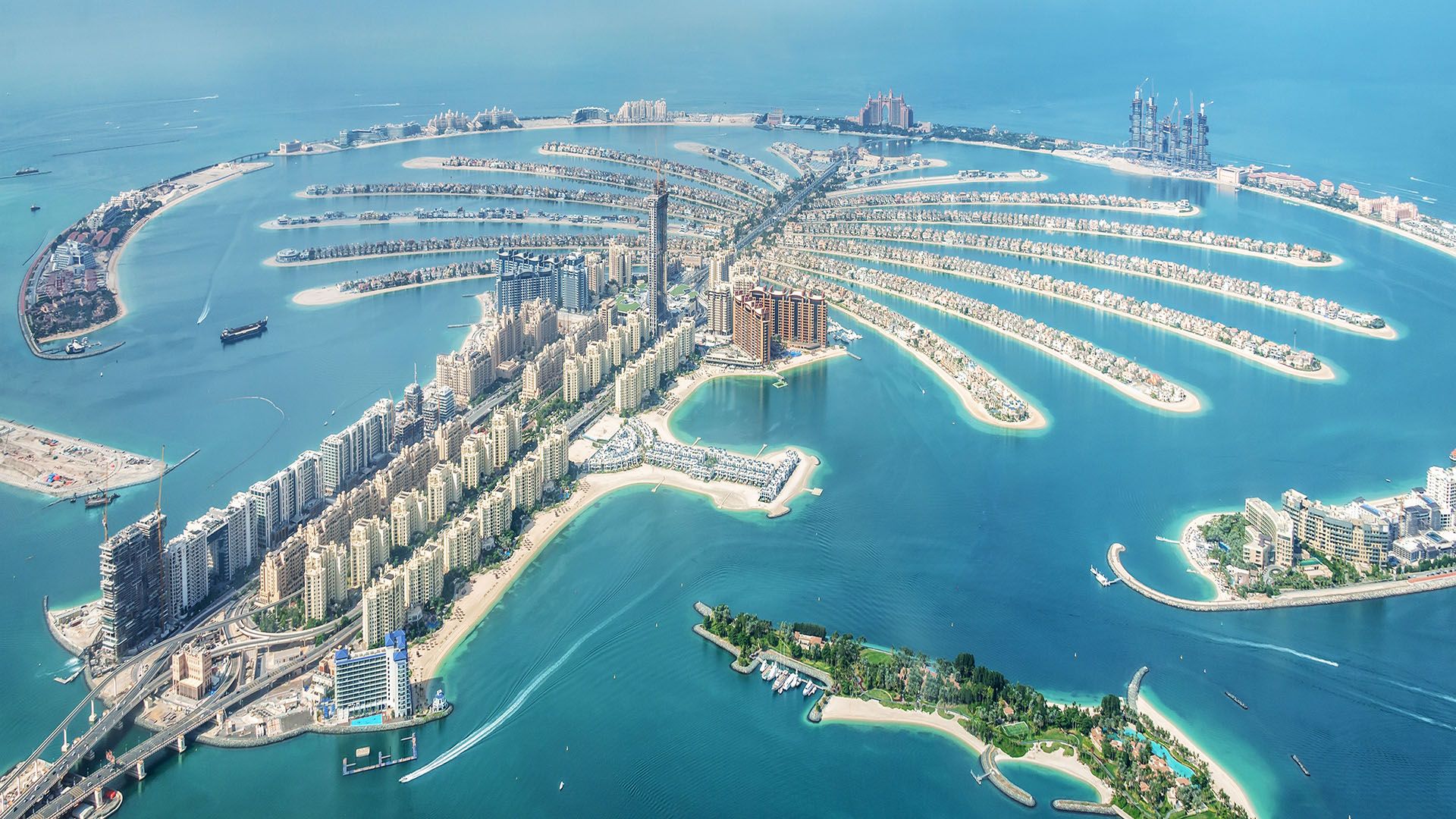 The low-lying coastal plains of the Netherlands have historically been prone to terrible flooding. Through an enormous system of dams, the creation of 2318 square kilometres of land and the closing off of Zuiderzee Bay, the coastline is now vastly better protected, and the works have been jointly named one of the Seven Wonders of the Modern World. 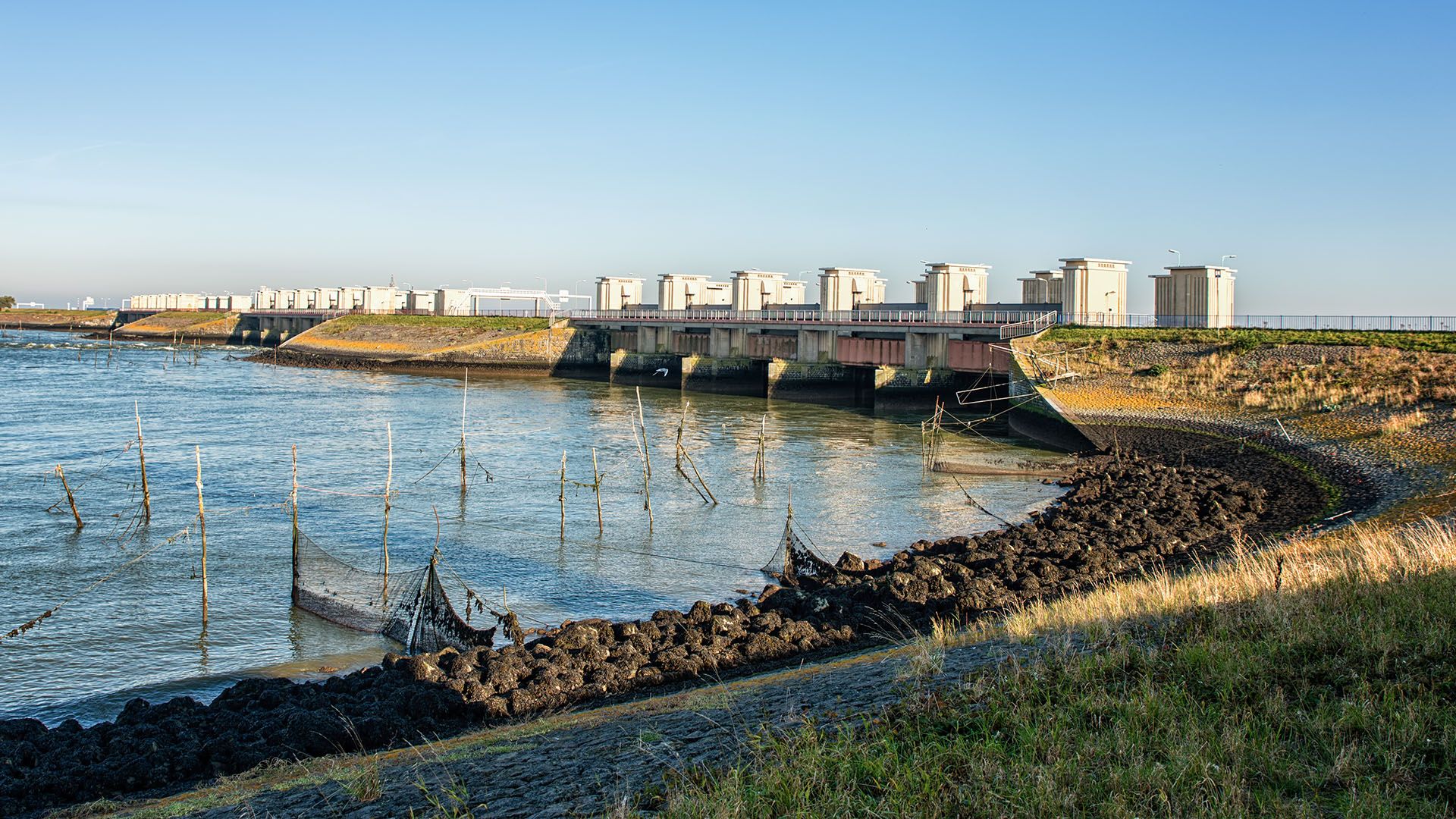 The Afsluitdijk (English: Enclosure Dam) is a major causeway in the Netherlands, constructed between 1927 and 1933 © © Atosan/Shutterstock

Opened in 2004 and often described as one of the greatest engineering feats of all time, the Millau Viaduct is a cable-stayed bridge in the valley of the River Tarn in southern France. This visually stunning structure is the tallest road bridge in the world; the central pillar is 343m above the ground – taller than the Eiffel Tower. 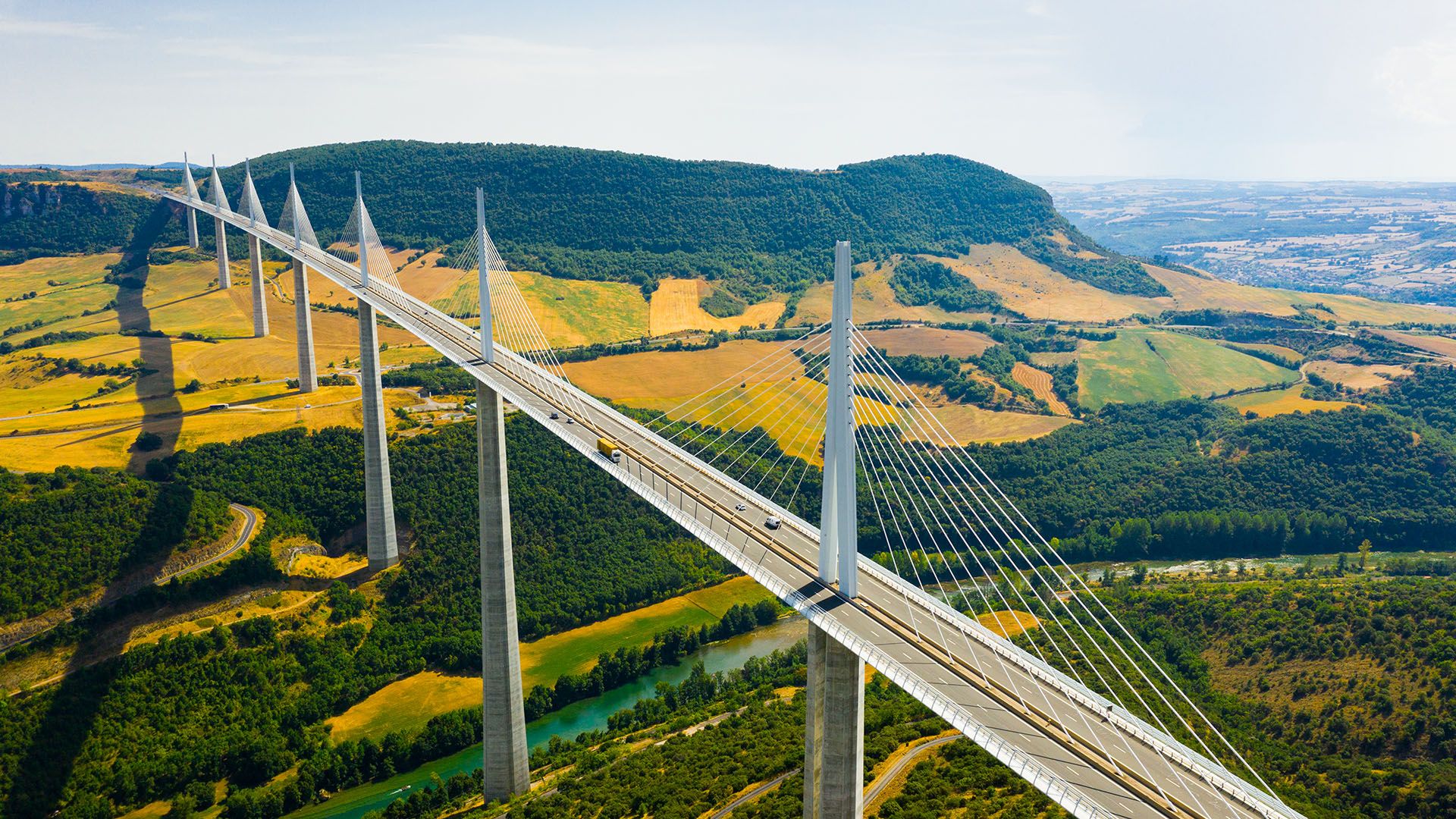 At 3.9km deep, Tautona (“great lion”) Mine is the deepest mine on Earth. It can take an hour to get from the rock face, where gold has been mined for over fifty years, to the surface. The mine is so deep that temperatures at the bottom reach 55°C, and powerful air-conditioning is necessary to keep the air at a safe temperature for miners. 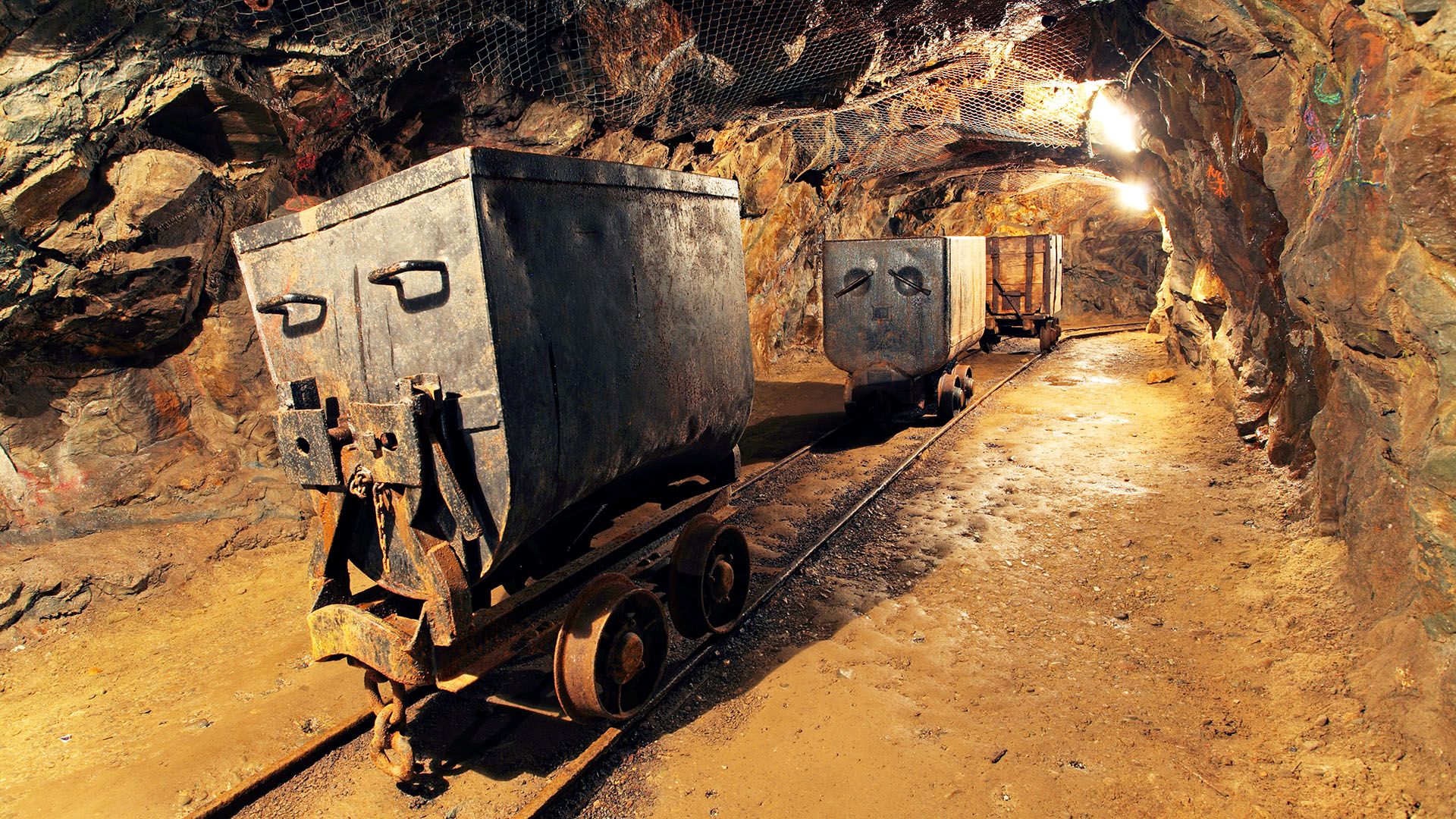 Smack bang on the Nevada-Arizona border, this massive axe-shaped dam was built during the Great Depression and cost 112 lives (96 during actual construction). It was the largest concrete structure in the world when built – there’s enough there to build a metre-wide path around the equator – and many of the techniques used hadn’t yet been proven to work. 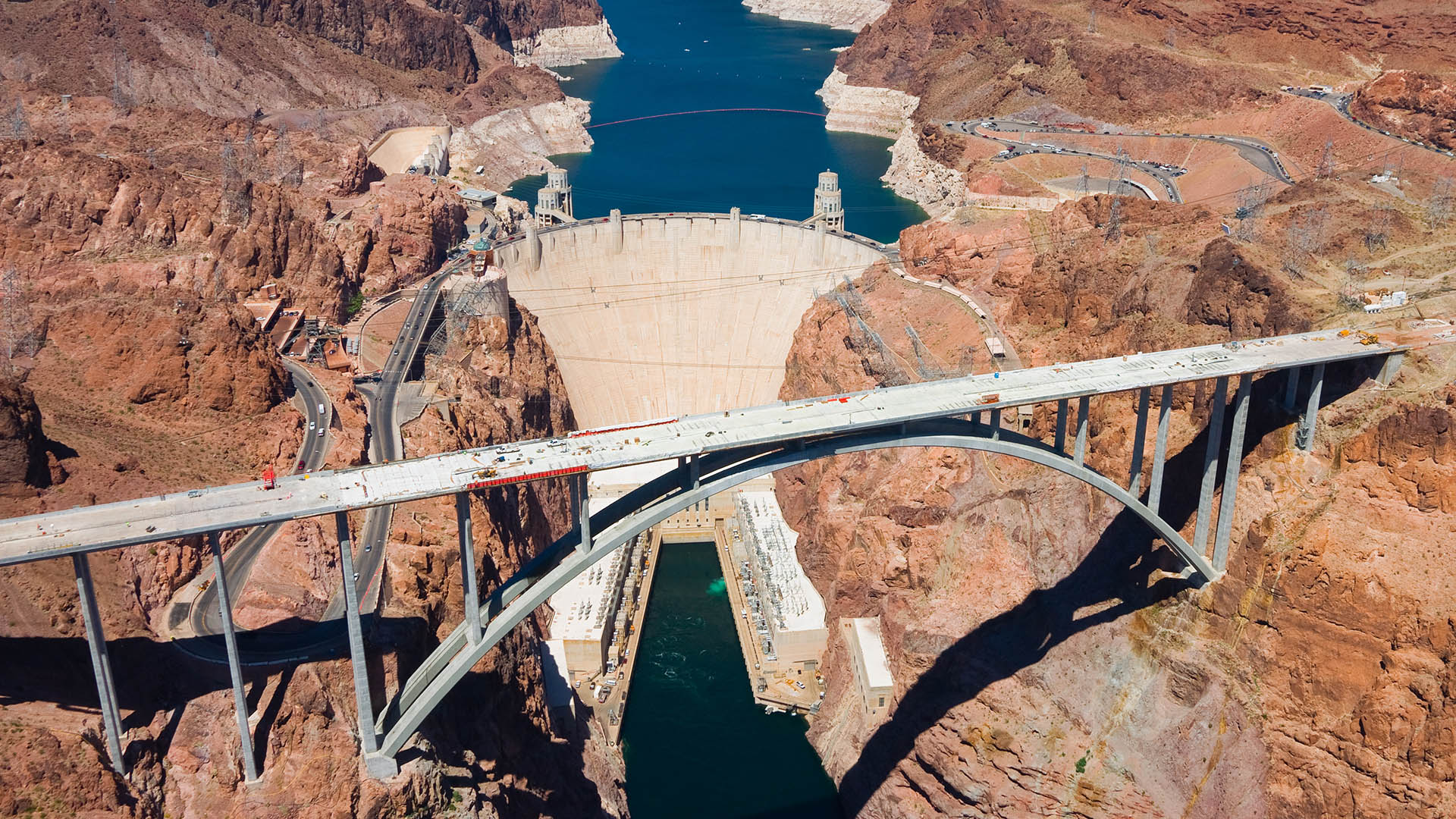 Connecting the Pacific and Atlantic oceans, the 77km ship canal across the Isthmus of Panama, a key international trade channel, was one of the most difficult engineering projects in history. Twenty thousand people lost their lives making the canal (mostly due to disease), which was opened in 1914 after 34 years of construction. 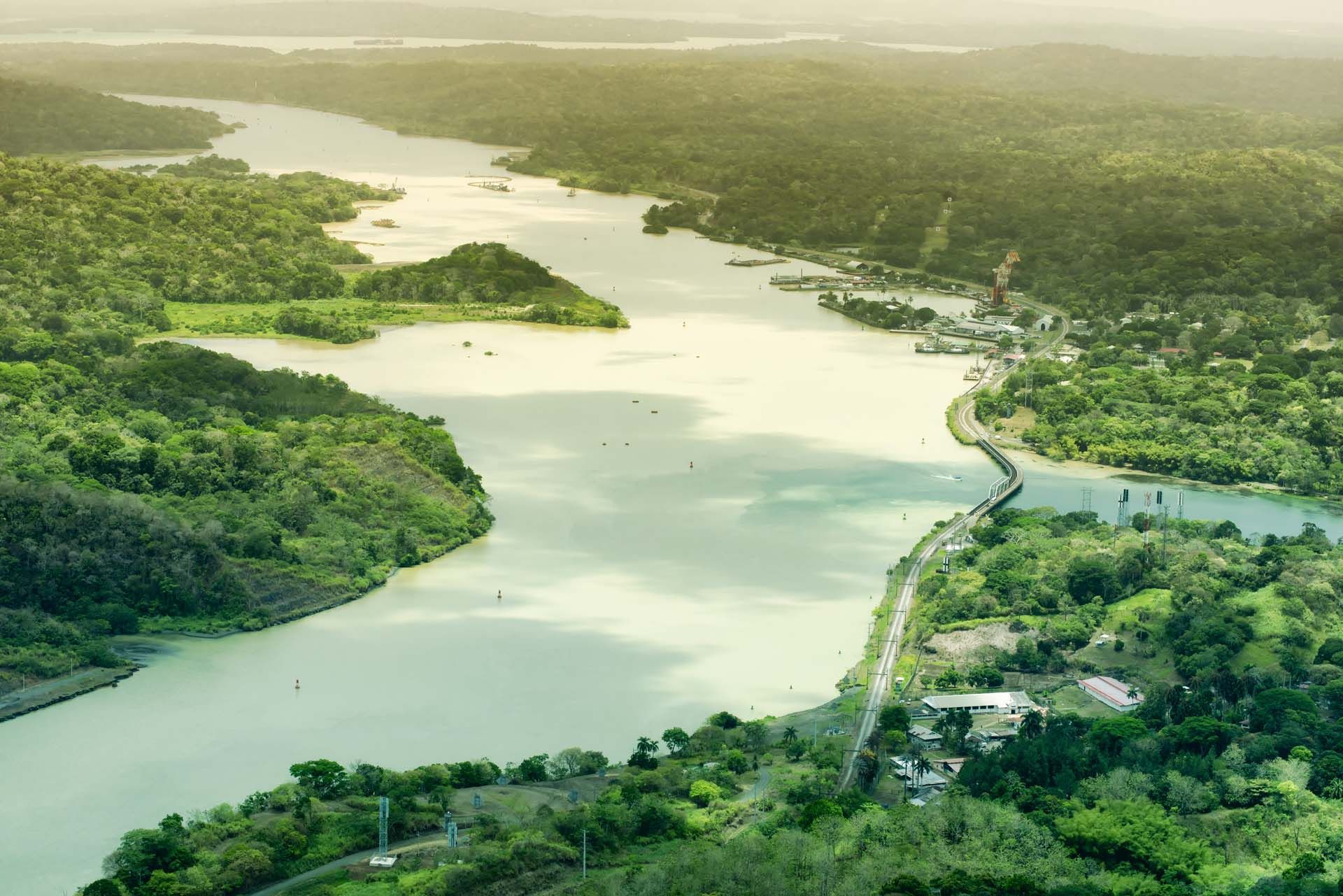 Set amidst the spectacular ravines, gorges, waterfalls and giant sandstone pillars of Wulingyuan, in China’s Hunan Province, lies a surprising sight: a glass elevator attached to the side of a cliff. Not the place for vertigo sufferers, the Bailong Elevator is 330m high – the highest outdoor elevator ever built. The views on the way up aren’t half bad. 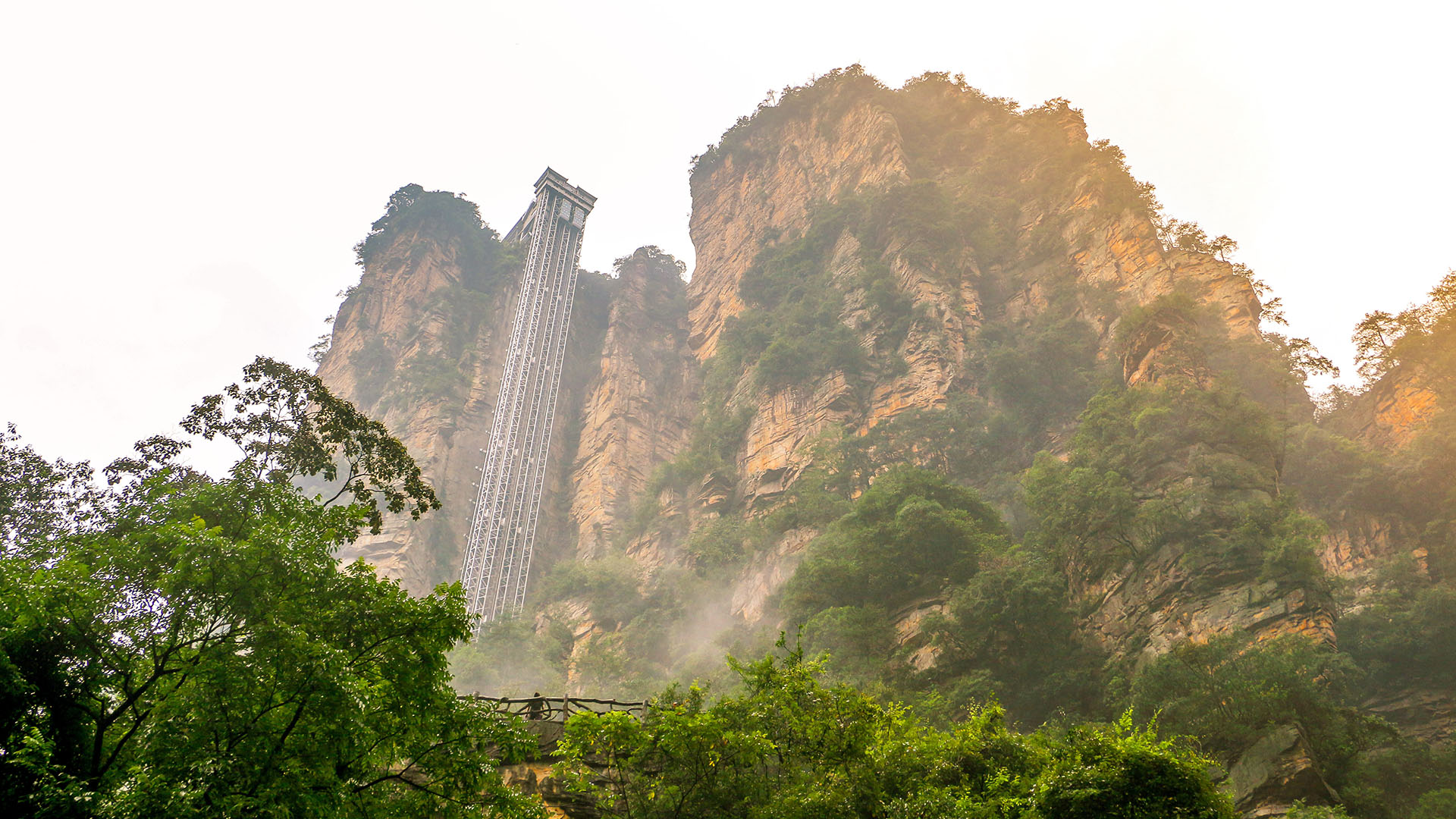 With the world’s longest underwater section of any tunnel, the Channel Tunnel links Folkestone in Kent, UK, with Coquelles in northern France, via high-speed Eurostar trains. The idea was conceived way back in 1802, by French engineer Albert Mathieu, but not started until 1988. It took six years, five 1100-tonne tunnel boring machines and £9.5 billion to complete. 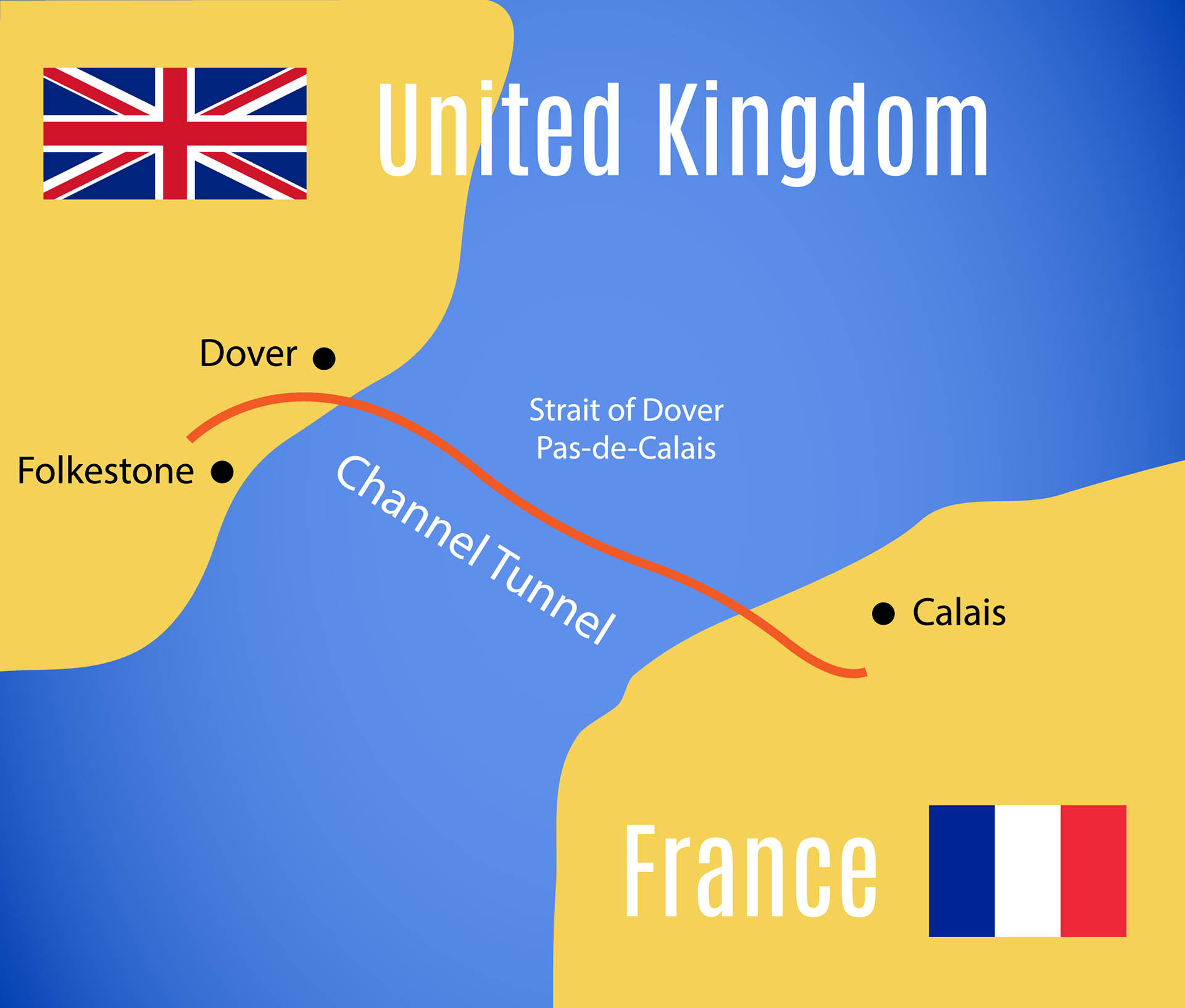 Opened in 1937 and named after the strait leading into San Francisco Bay from the Pacific, the Golden Gate Bridge was knocked off the title spot for longest suspension bridge decades ago. However, with a central span of 1.3km, this iconic Californian structure remains a vivid reminder of the extraordinary engineering leaps mankind has taken in the last century. 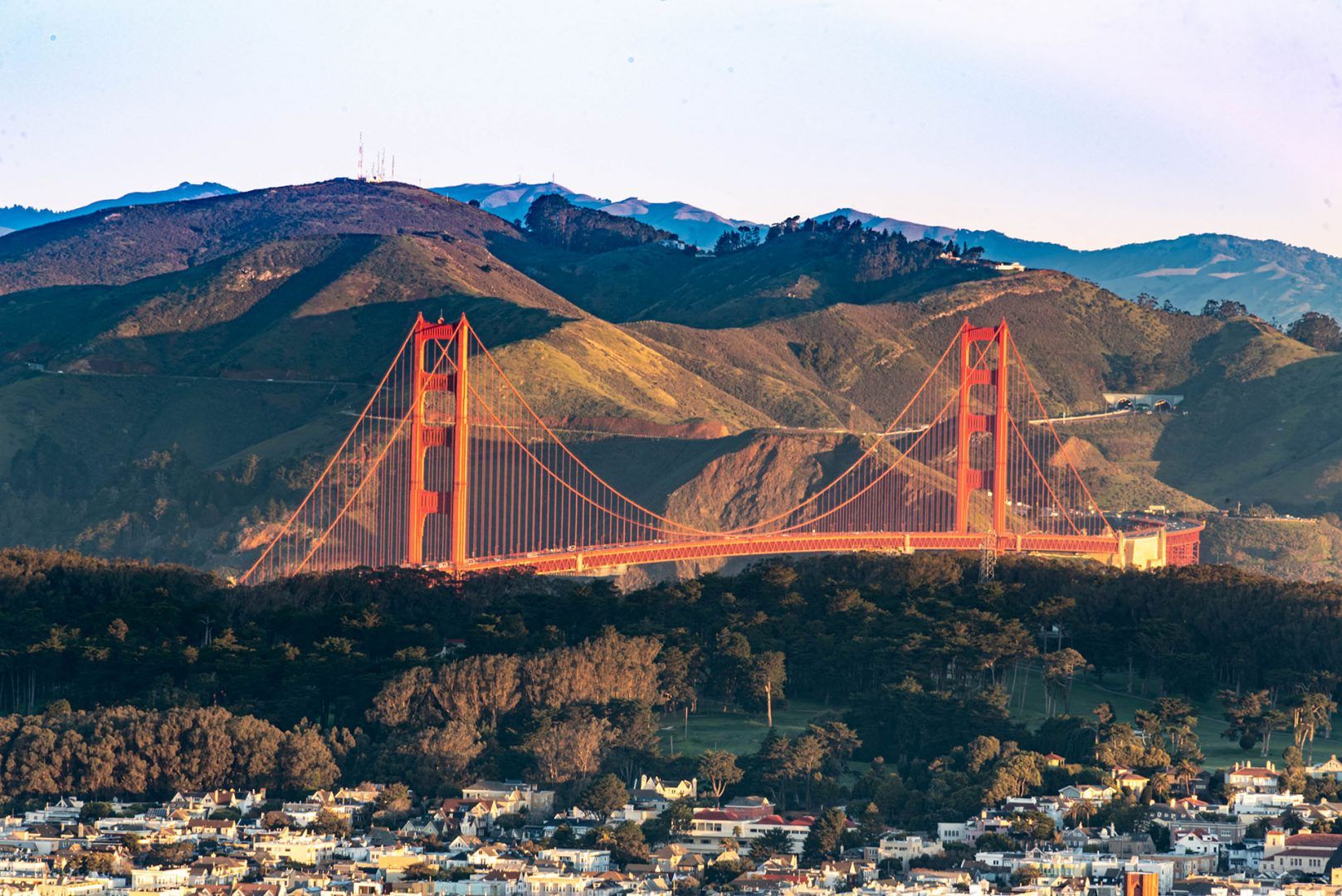 A view of Golden Gate bridge from the top of Twin Peaks mountain, the highest place in San Francisco © Shutterstock

It might take you a while to do a few lengths in San Alfonso swimming pool, a whole forty times longer than your average pool. This 1km-long pool opened in 1987 and contains 250 million litres of filtered seawater. Stretching down Algarrobo resort, about 90km from Santiago, it lies parallel to the Pacific-facing beach, where swimming is banned. 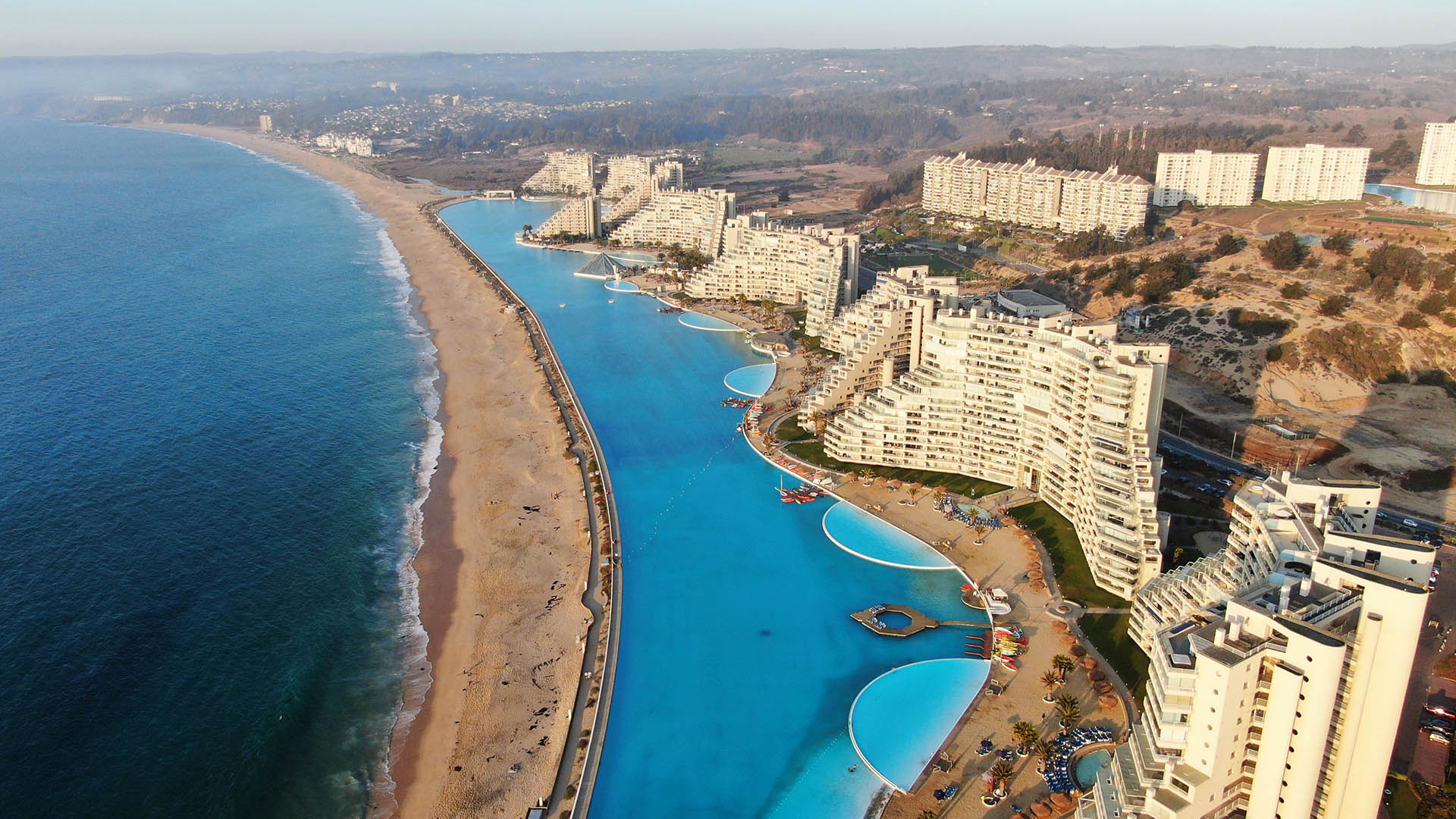 Egypt, where just three per cent of the nation’s land is arable, has a rapidly growing population. In an ambitious attempt to ease this strain, a system of canals carrying water from the vast reservoir of Lake Nasser to parts of the Sahara Desert, is currently being built with the aim of turning 2340 square kilometres of desert into agricultural land . 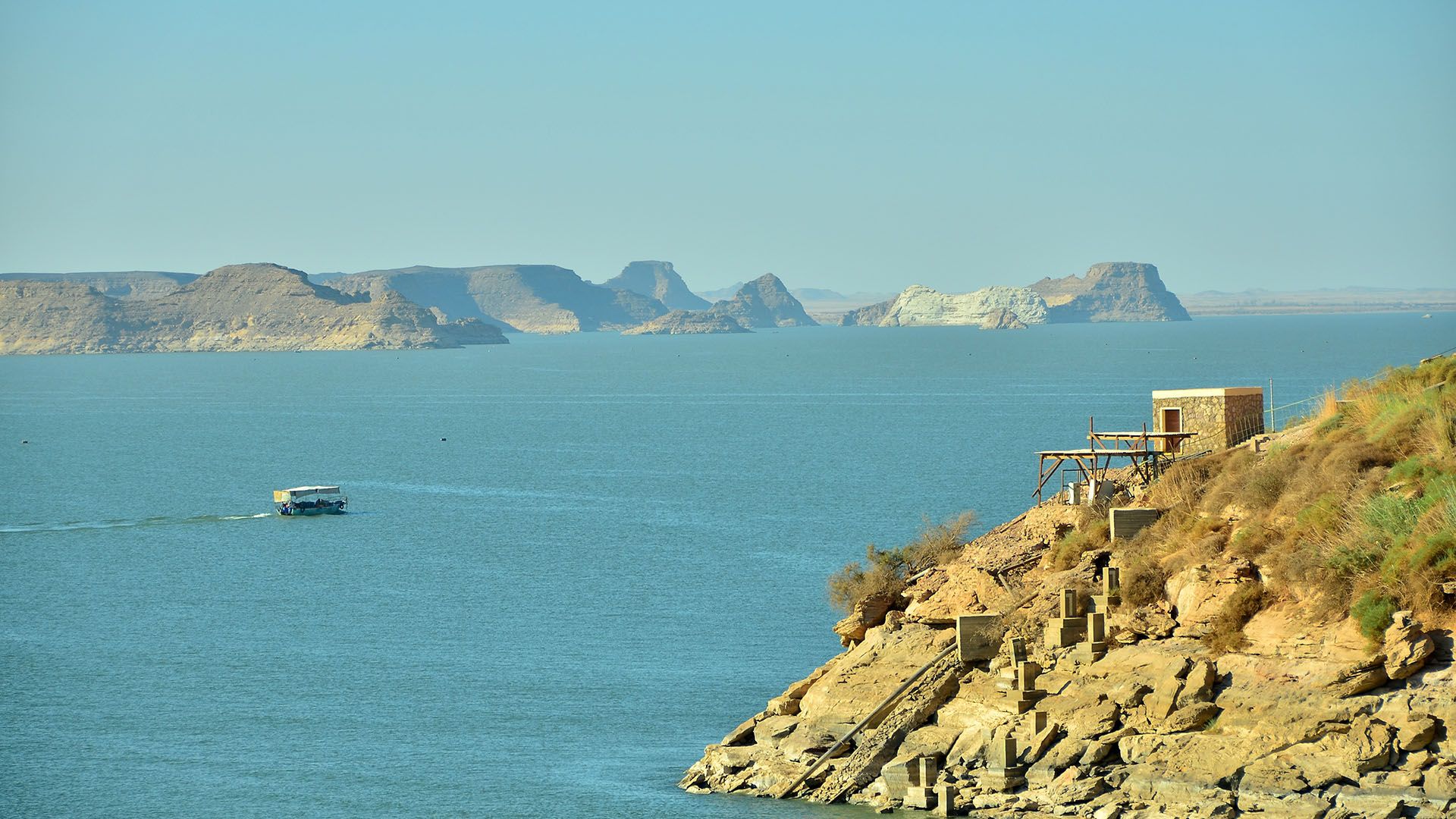 The longest single railway line in the world connects Moscow and eastern Russia with Japan, China and Mongolia. Its main route runs from Moscow, 9288km east to Vladivostock, by the Sea of Japan. The brain-child of Tsar Alexander III, construction began in 1891 and, though the Vladivostock route was completed in 1916, the railroad is still being expanded today. 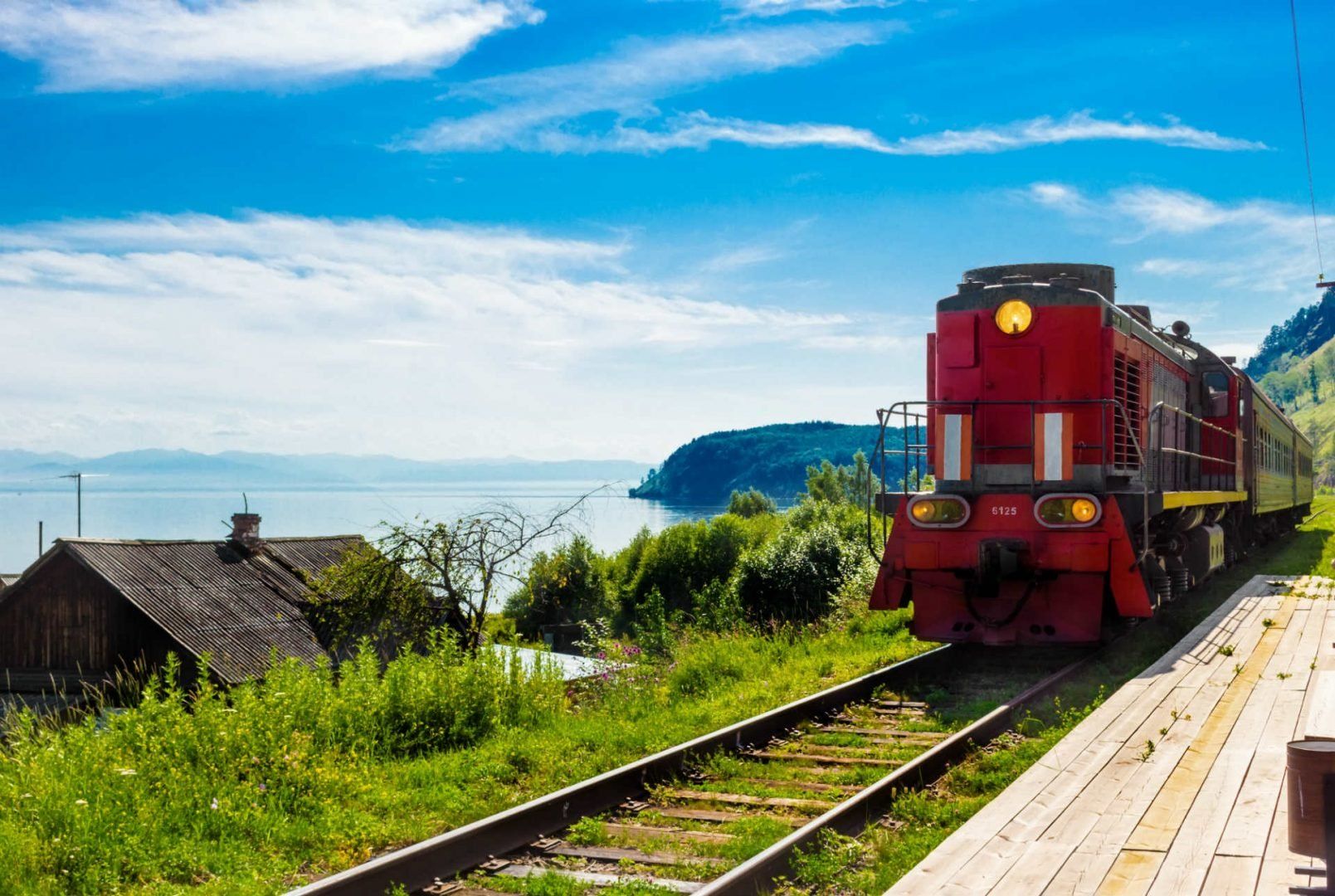 The solution to overcrowding at Osaka’s Itami Airport was to build a new airport on an artificial island 4km long and 2.5km wide, connected to the mainland by a 3km bridge – a huge project which, due to problems with the island sinking, became the most expensive civil works project in modern history, costing a whopping US$20 billion. 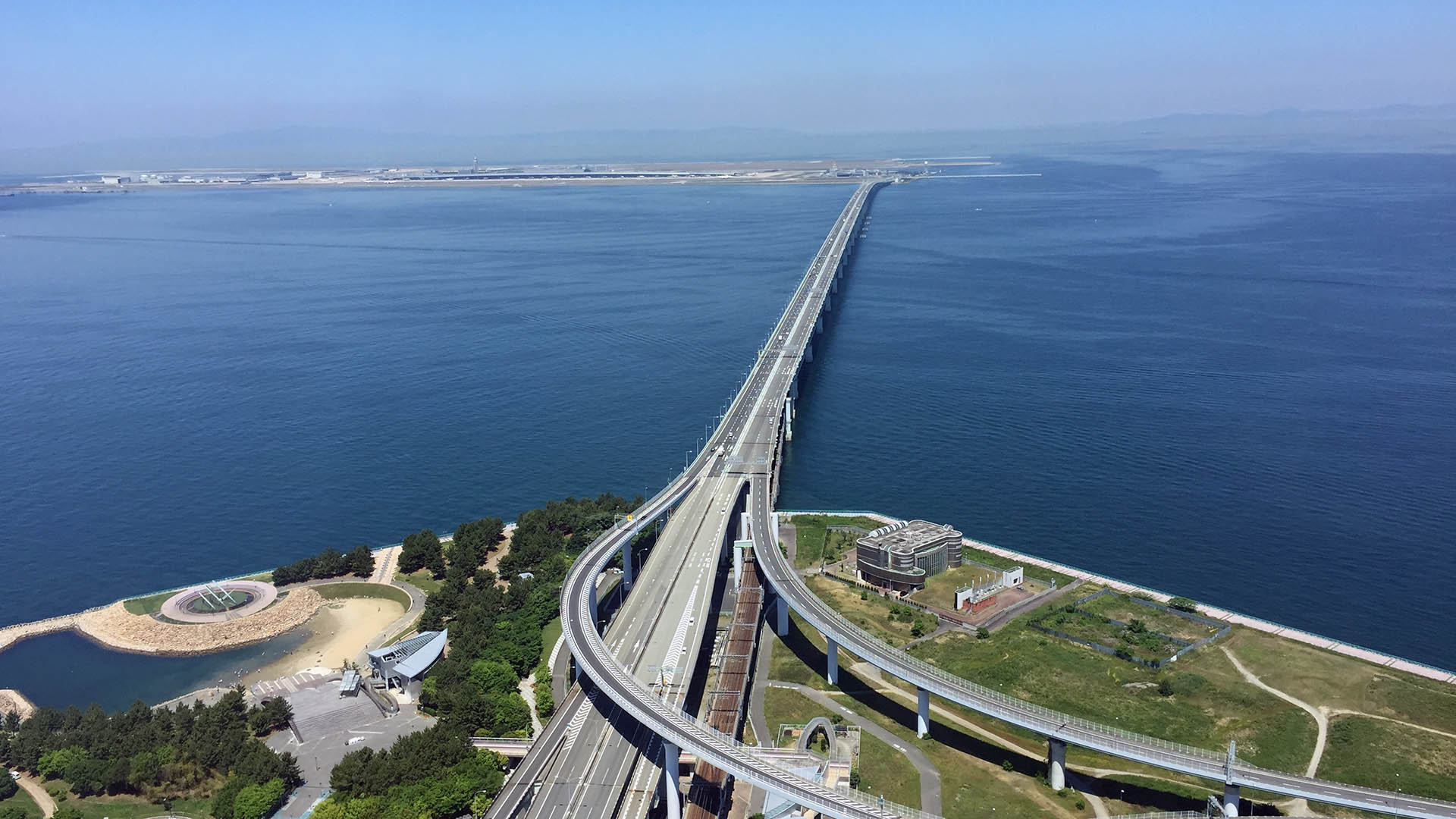 The world’s longest bridge runs for 164.8km from Danyang to Kunshan, in China’s Jangsu province, roughly following the path of the Yangtze River. Part of the Beijing-Shanghai high-speed railway, the trains wind their way on an epic journey through rice paddies and over rivers and lakes, one of which involves a nine-kilometre-long crossing. 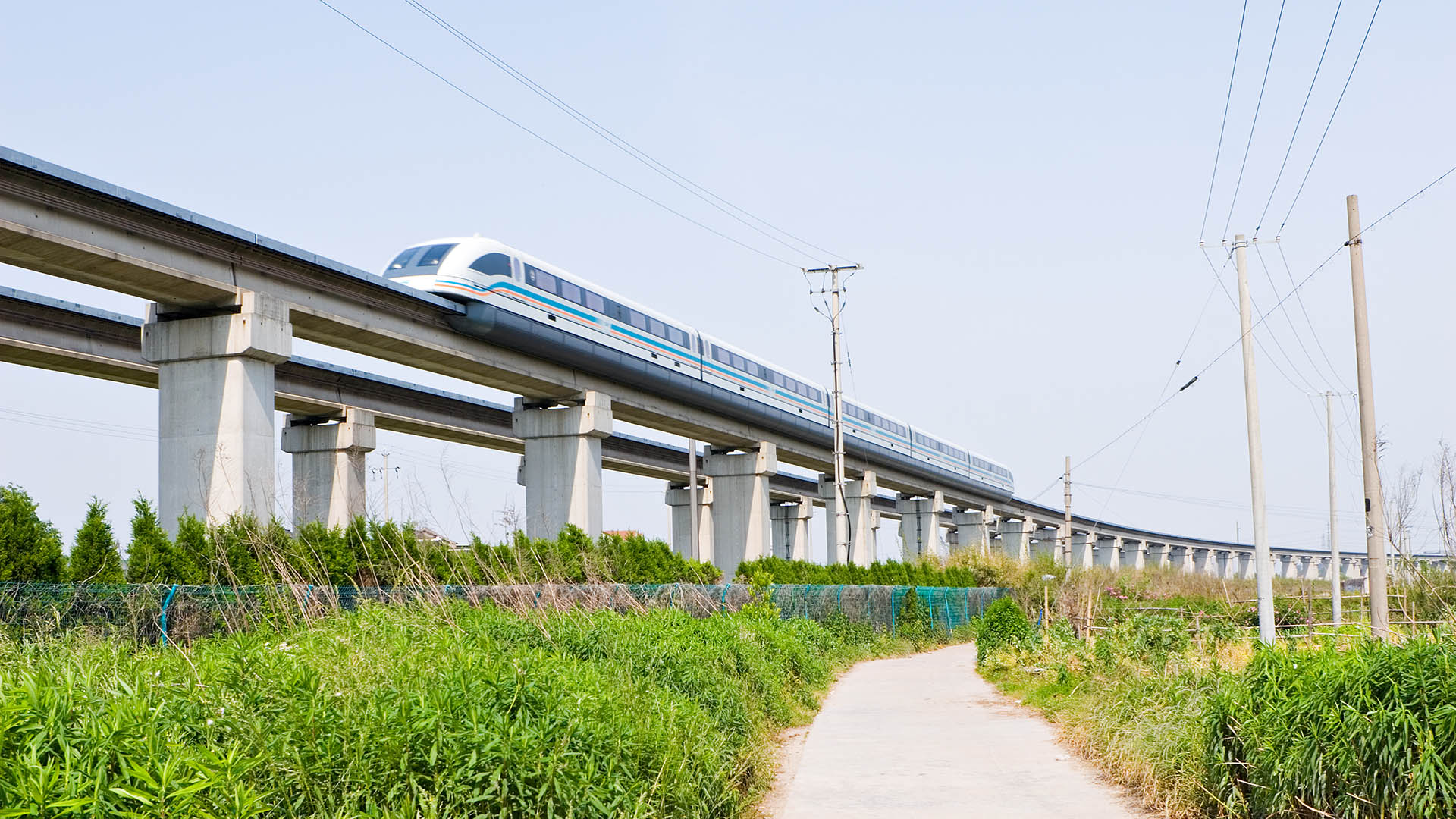 In 1959, Boston’s main highway carried 75,000 vehicles a day; by the early 1990s, that figure had risen to 200,000, and 16-hour traffic jams were predicted by 2010. To ease the city’s chronic congestion, a network of huge tunnels was built, costing a staggering US$14.6 billion. It was one of the most expensive, ambitious and complex engineering projects in US history. 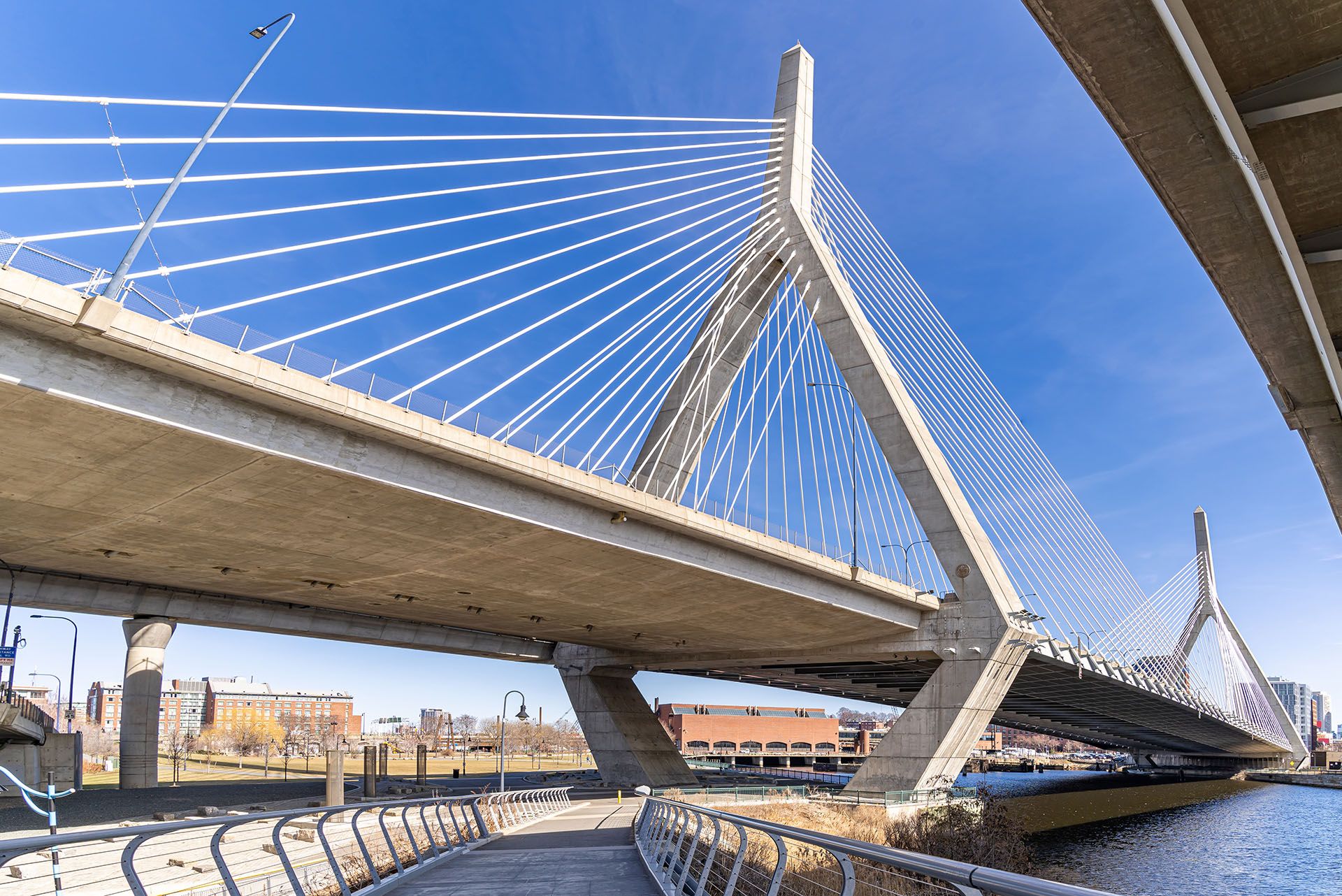 This article was originally written by Rough Guides Editors and appeared here.